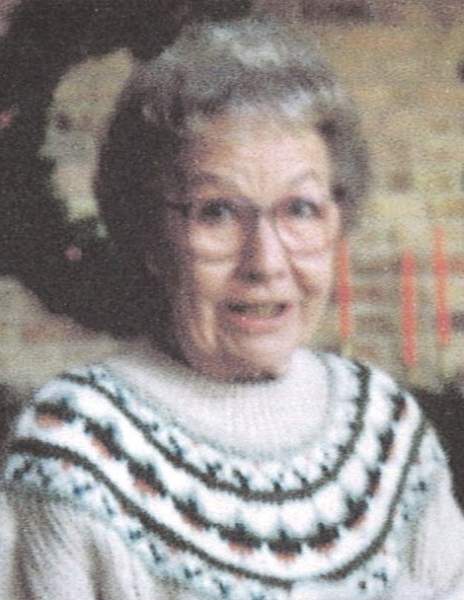 She was born to Carl and Julia (Johnson) Norquist on Feb 2, 1926 in Thief River Falls MN. She was one of 6 children. Mom grew up on a dairy farm with no electricity and no indoor toilet. She recalled the long cold walks to the one room school in her blue fur coat and hat that she just loved. The family later moved to Superior, WI where Carl had a job as a machinist on the Soo Line Railroad. When mom was a sophomore the family moved to Chippewa Falls. While in high school, mom worked at Woolworth’s Dime Store and Olson Café. She graduated from Chippewa Senior High. After graduation she worked at the Woolen Mill running machines that carded wool. That wasn’t the best job, so she decided to go to Chicago and live with some of her High School friends. There she worked in E Bonds at the Merchandize Mart.

At the start of the war things were different. She gave her notice and moved back to Chippewa where she worked as an apprentice beauty operator. After reading an article in the paper about the WAVES she decided to enlist. A few days later to she was off to boot camp at Hunter College in New York. She was picked to attend hospital corps school for 4 months. New York was exciting. She must have been quite the party girl, we have the pictures to prove it! Mom received her orders to work at the Portsmouth Naval Hospital in Portsmouth Virginia. She later transferred to the Provost Marshall’s office. She was like a female Shore Patrol. She was discharged with the rank of Pharmacists Mate 3rd Class.

While out with the girls, she met this very handsome guy, our dad Kenneth Gorton They were married and set up house in Chippewa Falls. Then came us, Debbie (Al) Ritzinger, Nancy Rothbauer, David, and Patty (Ed) Virnig. As if 4 kids weren’t enough mom worked at St Joseph’s Hospital and then later at Northern Colony as a Certified Occupational Therapist Assistant. After we all went our own ways, mom and dad bought land on Lake Wissota and built their dream house. After dad passed away, we wanted mom to be in town and not so isolated at the lake. None of the houses she looked at seemed right, so she built a beautiful home in town,  After Dave retired from his job in Milwaukee, he came to live with mom and was her jack of all trades. Mom’s health got worse and she needed more care than we could give her, she moved to the Chippewa Manor in February 2014.

Ardith was preceded in death by her mother and father; brothers, Ralph, Lyle and Jerry; sisters, Delores Stienmetz and Marjorie Walworth; her husband, Kenneth; daughter, Nancy; and son-in-law, Al Ritzinger.

The family appreciates and would like to thank the staff at the Manor for caring for mom.

Funeral services will be held at 1 p.m. on Friday, July 10th, at the Pederson-Volker Funeral Chapel with a visitation one hour prior to the service. Interment will be at Forest Hill Cemetery, Chippewa Falls with Military Honors conducted by the Chippewa Falls Patriotic Council.

The family would appreciate it if masks could be worn.

To order memorial trees or send flowers to the family in memory of Ardith Gorton, please visit our flower store.