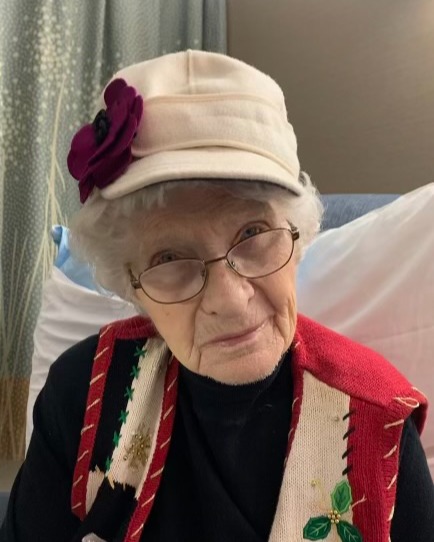 The rose still grows beyond the wall;

Just as it did in days of yore,

Just as it did on the other side,

Just as it will forevermore.

The daughter of a homesteader, a 2nd-generation Norwegian (Ivan Sylvester Larson, b. March 8, 1891, d. February 11, 1987) and a 2nd-generation Swede (Selma Matilda Larson nee Lindberg, b. November 29, 1892, d. April 10, 1966), Audrey Marie Roseland nee Larson was born January 6, 1924, on the Larson family farm in Ruby, Wisconsin, the second of five children born to Ivan and Selma.  Farm life in Ruby was not easy and not made easier by the Great Depression, so when Audrey had the opportunity to attend high school in Cornell, she jumped at the opportunity, working her way through as a nanny and household helper and boarding in town away from her family. Thus began Audrey’s life-long passion for education and self-improvement, with a budding interest in travel and seeing the world.

From Cornell, Audrey attended Business College in Eau Claire, Wisconsin, learning to become an excellent typist and stenographer while living with her sister Virginia.  It was here that she met Earl Lloyd Olai Roseland (b. December 24, 1924, d. May 17, 1996) who was studying at Eau Claire Teacher’s College (now UW-Eau Claire).  Earl knew he had struck gold when he met the brunette beauty that Audrey Larson had blossomed into and they danced (chaperoned) into their incredibly successful and lifelong partnership on December 27, 1944.  Earl began his career as a teacher in Wilmington, Delaware, where their first daughter Muriel Ann was born on December 3, 1945, before returning to Wisconsin where Earl sold insurance in the Cornell area.  Their son Dean Earl followed.

When Earl’s father passed away and his mother, Jennie (Janna), could no longer manage the farm by herself, Audrey and Earl moved to his family’s farm in Sand Creek, Wisconsin.  If Earl had not known already, he soon came to discover that he had not only married a genuine beauty, but also one of the smartest, most industrious and most resourceful women in the community of Sand Creek.  When she had chickens, it was a flock of 600 plus geese and pigs.  Audrey didn’t do anything in half measures.  She grew all of the vegetables that they ate, canning and cooking as required.  She cleaned and sewed most of their clothing and along the way raised two additional daughters, Kathleen Louise (b. April 10, 1952) and Cheryl Marie, all while never missing a milking in the 30 years that they ran their successful dairy farm.  In addition to being an active member of the New Hope Lutheran Church, Audrey also took special pride in hosting many of her extended family’s celebrations at their home on the farm.

When retirement took Audrey and Earl to Chippewa Falls, Wisconsin, it was not a leisurely activity for Audrey.  She immersed herself fully in her community and community organizations, including volunteering at the Visitors’ Center in Chippewa, the Sons of Norway, Church Women United, became a founding member of the Chippewa Senior Center (where she and Earl were later crowned Prom Queen and King), the Chippewa Writers Group, the Red Hat Society, and served as President of the Women’s Group at the Chippewa Central Lutheran Church.  During this first phase of retirement, prior to Earl’s passing, Audrey also built upon the creative pursuits that she had little time for while farming.  She wrote and illustrated stories for her grandchildren, dabbled in painting, and became quite accomplished with the Rosemaling techniques of Scandinavian painting.  During this time, Audrey also planned and grew extensive flower gardens at their new home, but somehow still found time to travel with Earl across America and cruises both to satisfy their curiosity in seeing new things as well as to visit with family in different locations.  All the while, and probably needless to say, she continued to love to dance—both with Earl and with her line dancing group the Westernettes.

Though Earl passed away, May 17, 1996, after Audrey and Earl celebrated their 50th wedding anniversary surrounded by friends and family in 1994 (Lots of red roses and dancing!), Audrey continued to travel and went even further abroad to Norway and Mexico; more closely a particularly memorable trip to Hawaii; and frequent trips to Branson, Missouri, the Dakotas, or anywhere good country music, dancing, or a good Elvis impersonator could be found.  Socializing and volunteering continued to engage Audrey’s active mind, whether dressing mannequins at the senior center thrift store, running a successful fashion show, or winning bingo and cribbage tournaments, she was always on the go.

The dancing slowed down a bit and Covid mandates impacted Audrey’s opportunities to remain fully engaged in her community, but her mind remained active through her relationships with friends and family right to the very end.  She passed peacefully on December 19, 2022, and is survived by her daughter, Muriel Shelton; son, Dean; daughter, Kathleen Marek (Brad Berg); daughter, Cheryl Roseland; grandchildren Heather Loyd, Ivan, Barry and Melanie Roseland, CJ and John Marek, Corrine Elkhatib, Jolene and Brian Eder; as well as an extensive collection of great-grandchildren.  Connie Lange was a special and dear friend to Audrey and her family in these last few years and greatly appreciated.  Audrey was preceded in death by her husband, Earl, her parents, Ivan and Selma Larson, her in-laws, Olai and Jennie Roseland, her brothers, Vernon and Kenny Larson, her sisters, Virginia Smith and Shirley Wariokois, and her sister-in-law, Gladys Bjerkness.

Audrey Marie Larson Roseland led an incredible and well-lived life.  Her family appreciates the excellent and loving care she received at Chippewa Manor and Mayo Clinic Hospice Care.  All will miss her dearly.  In lieu of flowers, gifts or cards, please consider donating to Mayo Clinic Hospice Care at www.philanthropy.mayoclinic.org.