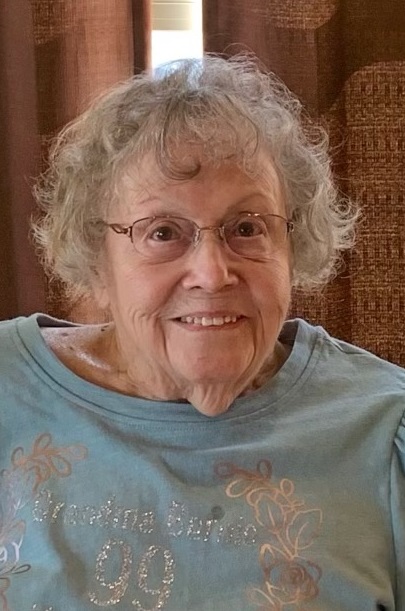 Bernadine M. (Boos), (Goettl) Larson, age 99, of Chippewa Falls, passed away peacefully on June 5, 2022, at the home of her daughter, Debra and Gary West.  She was born March 24, 1923, in Chippewa Falls to Elizabeth (Zwiefelhofer) and Joseph Boos.  She was one of 12 children and had many fond memories growing up on their farm.

Bernadine married Walter Goettl in 1940.  Together they had four children, Darlene, Wally, Yvonne and Debra.  She later married David Larson in 1982.  Bernadine always put her children and grandchildren first.  By Bernadine’s example, her children grew up knowing love, kindness, sharing, compassion and having a strong work ethic.  She took pride in their many accomplishments and enjoyed attending their music and sporting events.  She was strong in her Catholic Faith and taught her children strong morals, providing a good foundation for their own beliefs and faith. Bernadine was employed at the Northern Center, retiring in 1987.

Bernadine enjoyed growing beautiful flowers and delicious vegetables.  She was a wonderful cook and baker.  For many years, she took ceramic classes and shared most of the pieces she made. Bernadine also liked to dance to Old Time music and enjoyed travelling, especially during her retirement.

A funeral mass will be held on Thursday, June 9, 2022 at 11 AM at St. Charles Catholic Church, Chippewa Falls with Msgr. Gorman officiating.  Interment will follow at Calvary Cemetery, Chippewa Falls.

Visitation will be from 4-7 pm, on Wednesday, June 8, 2022 at Pederson-Volker Funeral Chapel, Chippewa Falls, with a prayer service starting at 7:00, visitation will continue one hour prior to the service on Thursday, June 9, 2022 at the church.

To order memorial trees or send flowers to the family in memory of Bernadine Larson, please visit our flower store.