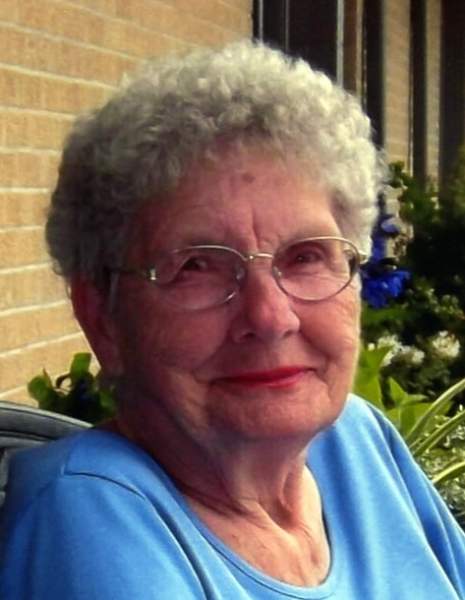 She was born April 11, 1925 in Jim Falls to Della (Claudy) and Raymond Witkus.  In 1944, she married Frank Brown and they lived in Chippewa Falls, later moving to the town of Anson.  Bernice enjoyed tending to a large garden and worked very hard while they raised their 5 children.  Then, Frank’s life was cut short when he suffered a massive heart attack in 1965.  In 1966, she married Peter Schichel and spent the next 13 years raising their family in northern St. Paul, MN.  They enjoyed many good times with friends and family until Peter was taken from her in a tragic automobile accident.  Bernice then returned to her roots in Jim Falls.  She worked for Chippewa County for 10 years and retired at the age of 70.  She spent many years participating in the St. Agnes Circle of the Jim Falls Sacred Heart Church, enjoying the friendships that developed there.  In 1997, she married Joseph “Bud” Schwetz and they took pleasure in many activities together including gardening, fishing, playing cards, watching Packer games (she loved the PACKERS), occasional trips to the casino and traveling out west and to Florida.

Bernice was very dedicated to her family and spent much of her life as a caretaker for any and all who needed her.  She cared for Bud when he became ill and took in her sister, Betty, who also needed some special attention.  In 2011, Bud passed away of cancer and in 2012 she also lost her sister, Betty.  Readjusting to life on her own again was a change for Bernice but she continued to enjoy her independent nature with activities that included gardening, fishing, daily games of cribbage with her brother, Albert, watching Wheel of Fortune, occasional trips to the casino, and 6 annual trips to Florida (from 2013-2018).  Bernice sustained a neck injury in 2017 and had to give up many things she loved including driving, which had always kept her so independent.  But she remained proud of her mind that was sharp as a tack.  In September 2019, she moved into Wissota Place (senior living apartments) in Chippewa Falls.  She was able to continue her love of bird watching (and feeding), liked the daily card games or Bingo and she loved the staff!  With changes having to be made related to the current pandemic, such as window visits only for friends and family, and limited socialization inside she seemed to lose her spirit.  Since Bernice was always “the boss” she chose this as her time to set herself free.

The family would like to thank all the staff at Wissota Place for their ongoing special care they gave Bernice.  Also, a big thank you to Mayo Clinic staff beginning with the care she received from Dr. John Larson (whom she loved) over a period of 25+ years, to Dr. Kyle Van Dyke (her current primary Mayo physician whom she also loved), who saw her often and provided extremely tender care that Bernice and her family appreciated more than he will ever know, to the nurses at the Chippewa Mayo Clinic (they were so kind to her), to the Eau Claire Mayo Emergency Department staff and the paramedics who worked so hard to keep her with us.  Bernice’s spirit will live on in all who knew and loved her!

Visitation will be held from 9-11 a.m., Saturday, June 13 at Pederson-Volker Funeral Chapel with a graveside service to follow at 11:30 a.m. at Copp Cemetery in the Town of Anson.

To order memorial trees or send flowers to the family in memory of Bernice Schwetz, please visit our flower store.