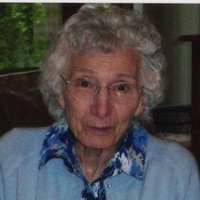 Blanche A. Krohn, 98, of Chippewa Falls, passed away peacefully on Thursday, August 16, 2018 at Our House Assisted Living in Chippewa Falls.

On September 12, 1936, Blanche married Walter “Wally” Krohn in Waukegan, IL. Blanche was a homemaker with three children, but she did also work at the Chippewa Canning Factory and at the Mason Shoe Co.

In 1962, the couple, along with their young son, moved to Kenosha, where Walter had accepted a position at American Motors Corp. They returned to Chippewa Falls every summer to spend time with their family at their cottage on the Yellow River. Walter and Blanche moved back to Chippewa Falls in 1976.

After Walter passed away in 1997, Blanche lived independently in her own home until the age of 96. She enjoyed crocheting, flower gardening and spending time with her children and grandchildren.

She was preceded in death by her parents; her husband; a sister, Winifred Sund in 2001; her stepfather, Rudolph Luhman; and her son-in-law, Donald Furst.

A private service will be held with burial in Forest Hill Cemetery, Chippewa Falls.

The family would like to express their appreciation to the staff of Our House for providing Blanche with exceptional care during her final years. They would also like to thank Heartland Hospice for their care and compassion.

To order memorial trees or send flowers to the family in memory of Blanche Krohn, please visit our flower store.