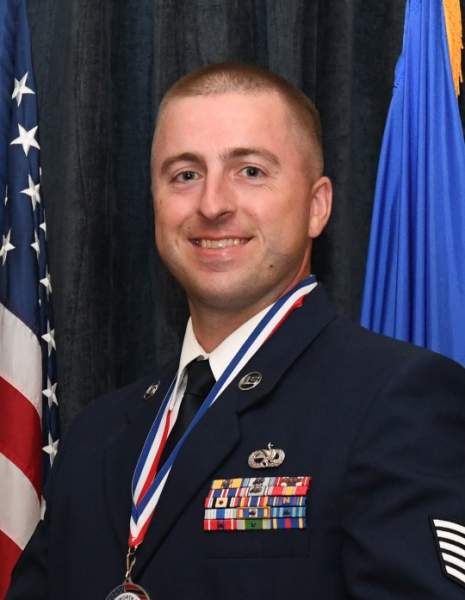 Brandon was born on July 10, 1989, to Daniel & Jennifer (Janigo) Anderson.  He graduated with the class of 2007 from Chippewa Falls High School.  Brandon proudly and eagerly served his country in the United States Air Force.  He served multiple tours overseas during his 12 years of service.  His deep love for the United States Air Force fast tracked him to the rank of Master Sergeant, and he was receiving a promotion to work directly with the Inspector General of his base.

He was united in marriage to Leaha Brzozowski on June 29, 2012 in Papillion, Nebraska. Together they have two beautiful girls (Coralise and Raigen), and 5 dogs, (Gunner, Max, Diesel, Remington and Angus) who were all the light of his life.

Brandon was an avid hunter and fisherman.  A sportsman in the truest sense of the word.  If it moved, he hunted it.  His favorite wild game were turkey, deer, and waterfowl.  You should see his collection of turkey fans and antlers.  He shot his first bear in Port Wing on the family farm, a trip he talked about constantly.  If he had an extra minute to spare, you could find him in the woods.  Brandon was eager to teach people how and where to hunt and often joked with his father about opening a guide service.  He shared his passion with anyone and everyone who wanted to listen.  Just being outdoors is where he wanted to be, whether hunting or fishing in his new boat with family or friends.  You should have seen his face light up when he talked about it.

Brandon was the most loving and patient husband and father.  He did the most that he could to teach his girls anything.  He was the cornerstone that that held his family up.

If anyone asked for a favor, he was there for them as a true and loyal friend.  Brandon always looked to the future and was constantly making plans which included settling in a nice house in woods on land in Wisconsin.

The loss of Brandon will be felt by so many.  He left an impression on anyone who came across his path.  Brandon was one of those people who you wanted as a friend.  He knew just how to make you feel important, even if it was just going out to the woods with you.  His love for the outdoors will not stop because of the knowledge that he passed on to so many, who will carry his passion on for many years to come.

Loving husband, father, son, brother, friend and mentor.  There are no words to express how important Brandon is to so many people.

Brandon was preceded in death by his grandfather, Walfred H. Anderson.

A funeral mass will be held at 12 p.m., on Thursday, November 7, 2019, at Holy Ghost Catholic Church, 412 S. Main Street, Chippewa Falls, with a visitation one hour prior to the mass at church. Fr. Justin Kizewski will be officiating. Interment will be at a later date in Greenwood Cemetery, Port Wing, WI, with full Military Honors.

Memorial contributions may be made to the Chippewa Rod and Gun Club.

To order memorial trees or send flowers to the family in memory of Brandon Anderson, please visit our flower store.