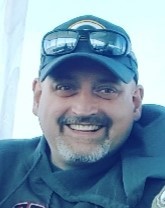 Brian M. “Bartely” “Bart” Bartels, 44, of Chippewa Falls, died Tuesday, December 11, 2018 at home surrounded by his family and under the care of Mayo Hospice.

Brian continued his education at Rice Lake Technical College and earned a machinist degree.  He worked at Salter’s Winterhaven Resort, Malaise Grocery, Blue Hills Inn, and Rice Lake Weighing.  He moved to the Eau Claire/Chippewa Falls area in 1995 and began working at W.S. Darley in Chippewa Falls where he was currently employed.

On October 4, 2003, Brian married Jennifer Nohr in Eau Claire.  Together, they have three beautiful children.  Brian was a true outdoorsman and enjoyed fishing, ice fishing, hunting, snowmobiling, and just being in the woods.  He enjoyed machining, creating and inventing, and made many useful things out of metal, including carts, trailers and ice shacks.  He was usually helping someone with a project and was always thinking of how he could help others, no matter how difficult the task.   He was a loving husband, father, brother, son, grandson and friend.

Brian is also survived by a large extended family from his hometown and Chippewa Valley who he considered his brothers and sisters, which consisted of former classmates, neighbors and old friends.

A celebration of Brian’s life will be held at 5 p.m., Sunday, December 16 at Central Lutheran Church, Chippewa Falls with the Rev. Aaron Sturgis officiating.

Visitation will be from 2 p.m. until the time of service Sunday at the church.

In lieu of flowers, memorials are appreciated and may go to an education fund that has been set up for Brian and Jen’s children, c/o Brian Bartels Benefit Account, RCU Bank, 215 Bay Street, Chippewa Falls, WI 54729.

To order memorial trees or send flowers to the family in memory of Brian Bartels, please visit our flower store.