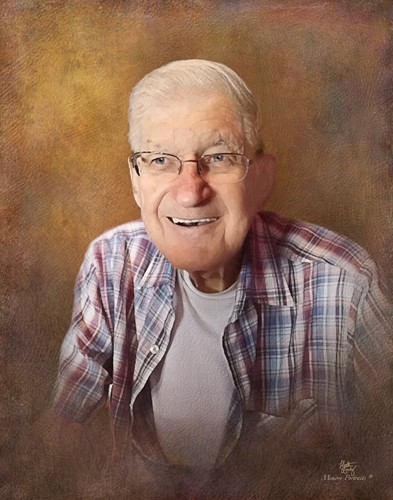 Clayton served honorably in the U.S. Army during WWII as a rifleman in the Infantry, 88th Division in Italy.

In Northern Italy he was captured by German soldiers on October 1, 1944.  From there he was moved to Stalag VII prison camp in Moosburg, Germany. He was then moved to Munich, Germany for three months where he endured three of the biggest air-raids of WWII. After Munich he was moved to a small town of Landshut, Germany where he remained until liberated April  29, 1945.  After being freed and with only the clothes on his back he and two other American soldiers "borrowed" a German car and drove to Regensburg, Germany where he caught a plane and flew back to France where he was part of camp Lucky Strike. From there he came home.

On July 3, 1954, he married June Lanser in Chicago, IL.  They resided in Chicago, where Clayton worked as a dock hand at a trucking company.   In 1956, they built a cottage on Bob Lake in Cornell where he enjoyed his summers fishing.  After their retirement in 1987, they moved to Eau Claire.  June preceded Clayton in death on March 26, 2003.

He is survived by two daughters, Susan Krause of Milwaukee and Kathie (John) DiNovella of Arena; a sister, Carol Kramer of Chippewa Falls; and many nieces, nephews and cousins.

He was preceded in death by his parents; his wife, June; five brothers, Gilbert, Willis, Lester, Alfred and Vernon; and three sisters, Mildred, Ora, and Orpha.

A celebration of life with military honors conducted by the Chippewa Falls Patriotic Council will be held at 11:30 a.m., Saturday, July 24, 2021 at Forest Hill Cemetery, Chippewa Falls. A lunch will follow at the Irvine Park main pavilion.

To plant a beautiful memorial tree in memory of Clayton B. "Ding" Krause, please visit our Tree Store.

To order memorial trees or send flowers to the family in memory of Clayton Krause, please visit our flower store.