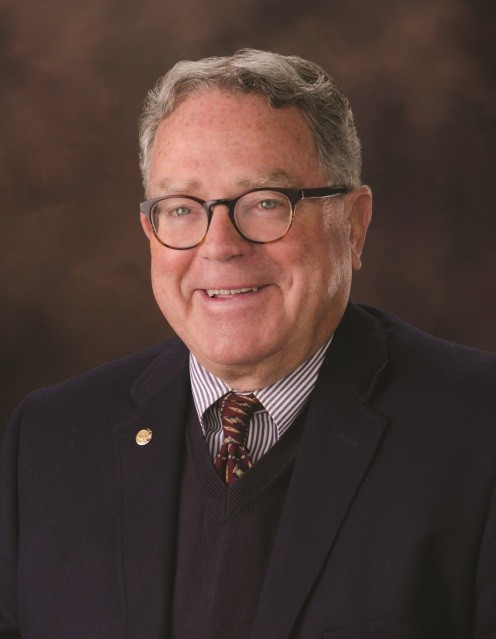 On Monday March 16, 2020 David Bradley Fish, Senior, (Superman) loving husband, father, and grandfather passed away unexpectedly at the age of 75.

David was born on August 18, 1944 in Cedar Rapids, IA (Go Hawks) to Ken and Genevieve (Kelley) Fish.  He graduated from St. Louis University with his Masters in Hospital Administration.

While doing his hospital internship in San Antonio, TX he became smitten with a nurse in training. On June 21, 1969 he married that nurse, a southern belle, the love of his life Dianne Elizabeth Carver, (Cinderella).  Together they raised five children in Chippewa Falls, WI.

David (Captain America) was drafted into the US Army during the Vietnam War and served 3 years of active duty in Landsthul, Germany as part of the Medical Service Corp.  He continued his military commitment as part of the Army Reserves, with another activation to active duty during Desert Storm, retiring after 22 years as a Lieutenant Colonel.

David was president and CEO of HSHS St. Joseph’s Hospital of Chippewa Falls, working closely with the Hospital Sisters of St. Francis of Assisi for 33 years, leaving a profound impact and legacy for health care delivery.  A few of his larger accomplishments during this career included serving as President of the Wisconsin Hospital Association, and the American Hospital Associations Small and Rural Hospitals.  He served the community as president of the local United Way, Chamber of Commerce, and served on multiple boards including the Heyde Center, Irvine Park, and Ann Marie Foundation.  He was the driving force behind the development of the Community Foundation of Chippewa County.

However, David’s most personally satisfying professional contribution came from his implementation of servant leadership, a cornerstone core value of HSHS St. Joseph’s Hospital.

Despite these accomplishments, David’s humility is what resonates.  His own children never knew the significant roles and awards he was given until his retirement celebration.  When asked by others what he did for work, he would reply first “Whatever my wife tells me” and then “I work at the hospital.” And if questioned further he would reply “I work in administration.” And leave it at that.

David’s greatest pride and joy came from his love and commitment to his family.  There aren’t enough adjectives to describe him.  He was playful, loyal, funny, and infinitely selfless.  He served as event planner for family graduations, milestone birthdays, and annual Spam fishing trips.  He was an avid sports fan (Go Pack) enjoying professional and college events, but mostly being present at any event his grandchildren were participating in.  He loved planning unique and adventurous travel with his wife, visiting obscure museums, university campuses, and presidential libraries.  He cherished creating memories and laughter for his family and friends.

He will be sorely missed but always remembered.  He would want everyone to know “You can be on my team”.

A funeral service will be held at 11 a.m., Fr iday, August 21 at St. Charles Borromeo Catholic Church, Chippewa Falls with Msgr. Michael Gorman, Fr. Frank Corradi and Fr. Dennis Carver concelebrating.  Interment with military honors conducted by the Chippewa Falls Patriotic Council will follow at Hope Cemetery, Chippewa Falls.  Following the service, all are welcome to join the family for a lunch at Wissota Golf.

Visitation will begin at 9:30 a.m. Friday at the church.

To order memorial trees or send flowers to the family in memory of David Fish, please visit our flower store.