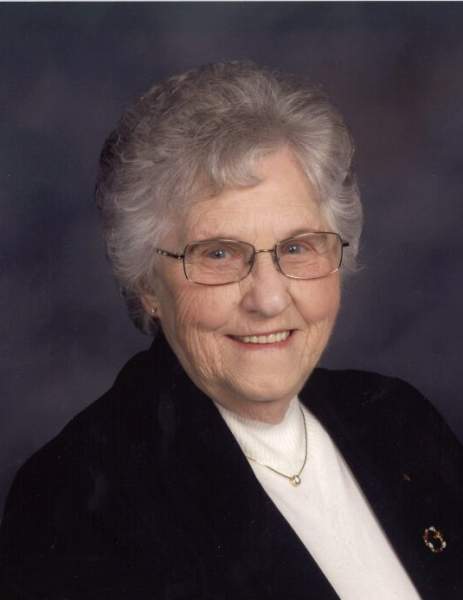 Delores Catherine (Frederick) Woodford went to heaven on July 7, 2021, the 101st anniversary of her husband Frank’s birth, while under the care of St. Joseph Hospice at the Chippewa Manor Nursing Home.

Born on August 11, 1927 to Vernar and Hannah (Geiger) Frederick, Delores spent all of her childhood and much of her adulthood in Lafayette Township, Chippewa County, WI.  Spending her early years on the family’s farm during the Great Depression, she learned the value of a dollar and carried that ethic throughout her life. By the age of eight, she was responsible for doing the family baking on a wood fired cook stove. She completed her formal education at McDonnell High School graduating in 1945.

Upon his return from serving with the Army Air Corps during WWII, Delores was united in marriage to Frank L. Woodford on May 31, 1946, and they established a small farm in Lafayette Township. To that marriage were born three children: Joseph, Judith, and Patricia.  Delores played an active role in the lives of her children, believing that an appropriate education was the way to a good life. While living on the homestead, she tended to a huge garden, canning and freezing much of what was to be eaten by her family.

After living in St. Croix Falls for several years, Frank and Delores moved to a new home in Hallie.  A few years after Frank’s passing in 2004, Delores moved into a Residential Living Apartment at Chippewa Manor where she was known to have a delightful sense of humor and skill at the card table. She was a faithful member of Holy Ghost Catholic Church her entire life belonging to St. Rita’s Circle and volunteered serving funeral lunches. Throughout their married life, Frank and Delores traveled throughout the United States and Great Britain visiting their children and enjoying what each area had to offer. Delores had a special love for Irvine Park and looked forward to viewing the lighting done each Christmas season.

Delores was predeceased by her husband, Frank; her parents; her grandson, Robert Joseph Woodford; her brothers, John (Alice) & Richard Frederick; and twenty brothers-in-law and sisters-in-law.

The Funeral Mass will be held at 11 a.m. on Wednesday, July 14, 2021 at Holy Ghost Catholic Church, 412 S. Main St. Chippewa Falls, with a visitation one hour prior the Mass at church. Fr. Brandon Guenther will be officiating. Entombment will be in the Chapel of  Hope Mausoleum, Chippewa Falls.

Donations in Delores’ name may be made to Chippewa County Historical Society or Our Lady of the Falls Grotto Shrine Restoration Project at Notre Dame Church, Chippewa Falls.

The family would like to sincerely thank the staff at the Chippewa Manor Residential Living Facility and the Nursing Home for the compassionate and wonderful care they have provided our mother over the past nine years.

To order memorial trees or send flowers to the family in memory of Delores Woodford, please visit our flower store.