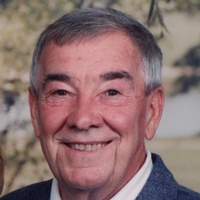 Denny grew up in the Anderson Hotel in Bloomer and enjoyed having most of his meals there as a child. He graduated from high school in Bloomer and was a proud member of the football team. Denny married Mary Lu Brick at Notre Dame church in Chippewa Falls on July 16, 1955. He was in the U.S. Army and stationed at Fort Knox, Kentucky for two years. They moved to the Chicago area in 1961 where he worked as a foreman for H. Kramer & Co. foundry for many years. After retirement they returned to Chippewa Falls, where he enjoyed golf, playing cards and rooting for the Bears.

He is survived by his wife, Mary Lu Amundson; one sister-in-law, Judith (Armand) Vaudreuil; nephew, Craig (Susan) Vaudreuil; niece, Amy Vaudreuil; and grand-niece, Keelin Vaudreuil; as well as other family and friends.

A private service will be held.

In lieu of flowers, memorials in Denny’s honor may be made to the Alzheimer’s Association.

To order memorial trees or send flowers to the family in memory of Dennis Amundson, please visit our flower store.