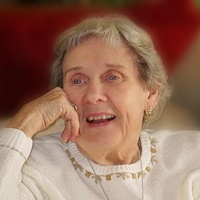 Dolores Laura Bichner, 91, of Chippewa Falls, passed away on Thursday, October 18, 2018 at Our House Memory Care in Chippewa Falls where she lived since 2013.

Dolores was born in Somerset, WI to Walter and Evelyn (Westphal) Meinke on February 17, 1927. She married her high school sweetheart, Donald Bichner, on June 23, 1948, beginning a love story which spanned the next seventy years. They moved to Chippewa Falls in 1962 where they raised their sons, Craig, Michael, Mark, and a daughter, Laurie.

Although Dolores did not work outside the home or have formal training, she drew dozens of floor plans for houses her father-in-law built in Minnesota. Later, she and her husband partnered to purchase and remodel three buildings into multi-unit rental properties based on her designs.

Dolores was a devoted wife and dedicated her life to her family. She was an accomplished cook and enjoyed hosting dinner for friends and family at her beautiful home on Lake Wissota. Dolores and Don enjoyed travelling, collecting antiques, and spending time together.

A memorial service will be held at 12 p.m., Saturday, October 27 at Pederson-Volker Funeral Chapel, Chippewa Falls with Rev. Robert Hoekstra officiating. Private interment will be at Hope Cemetery, Chippewa Falls.

Visitation will be held from 10 a.m. until the time of the service Saturday at the funeral home.

To order memorial trees or send flowers to the family in memory of Dolores Bichner, please visit our flower store.