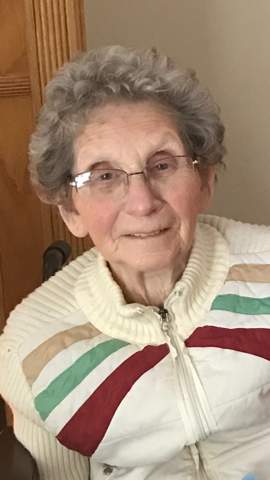 Dorothy Jean Johnson ended her earthly journey peacefully on February 29, 2020, after more than 91 years, surrounded by loved ones. Dorothy was born the youngest child of Peter and Anna (Rapko) Hodowanic on January 28, 1929.

Upon marriage, Dorothy and Merton purchased her parents’ farm and operated it until 1980.  It was there she raised their nine children, instilling in them a strong work ethic and values to guide them in their lives.  Dorothy was an equal partner on the farm, not afraid of hard work in order to provide for her family.

Selling the farm in 1980, Dorothy and Merton moved to the Lake Wissota area, where each continue to work in new ventures.   Dorothy pursued CNA training and worked for many years at the Heyde Health System, retiring to care for her husband after he was diagnosed with Alzheimer’s.  Dorothy loved to keep busy, especially outdoors.  Her gardens and flowers were her delight and they gave her great pleasure.   She was a feisty lady who, though small in stature, was always ready to stand up for what she believed, trusting her oldest son, Donald’s ultimate sacrifice in the Vietnam war,  gave that freedom to all.

A service celebrating Dorothy’s life will be held at Our Savior’s Lutheran Church, 1300 Mansfield Av, Chippewa Falls, on Saturday, March 7, 2020, at 11 AM, with Pastor Jim Johnson officiating. The family will greet family and friends from 9 AM until the time of service. Burial will be in Evergreen Cemetery, Stanley.

To order memorial trees or send flowers to the family in memory of Dorothy "Dot" Johnson, please visit our flower store.