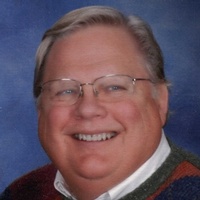 He was born October 23, 1951 in Fort Belvoir, Virginia to Edris (Miller) and Carl Houkom. He grew up on a farm outside West Fargo, ND and graduated from West Fargo High School.

Ev continued his education at Concordia College in Moorhead, MN where he earned a BA degree in 1973, then did graduate work in biochemistry at MIT in Cambridge, MA. During this time, he decided to pursue a medical degree, which he received from the Medical College of Wisconsin in Wauwatosa in 1986. He did his residency in Family Practice at St. Michael's Hospital in Milwaukee, completing it in 1989.

On June 16, 1973, he married Susan L. Egge at the Albion Lutheran Church in rural St. James, MN. They resided in Boston and Cambridge, MA, and Milwaukee and Wauwatosa, WI before moving to Park Falls, WI where Ev was a family physician at the Marshfield Clinic, Park Falls and Phillips Centers.

Retiring in May 2013, they moved to Chippewa Falls in July of that year.

Ev was an accomplished author and had written and published two books. He enjoyed playing his "baby" grand piano, and singing. He was also a voracious reader.

Ev loved to spend time at their cabin on Cochran Lake in Price County.

He was preceded in death by his parents; and a brother, Jeff Houkom.

A memorial service will be held at 11 a.m., Tuesday, May 22 at Central Lutheran Church, 28 E. Columbia St., Chippewa Falls with the Rev. Aaron Sturgis officiating.

Visitation will be from 4-7 p.m., Monday at Central Lutheran Church, and one hour prior to the service Tuesday, also at the church.

Memorials may be designated to one of the many organizations Ev held dear to his heart: Central Lutheran Luther Park Camperships; the Chippewa Falls Mentor Program; or NW Synod of WI Lay School of Ministry scholarships.

To order memorial trees or send flowers to the family in memory of Dr. Houkom, please visit our flower store.