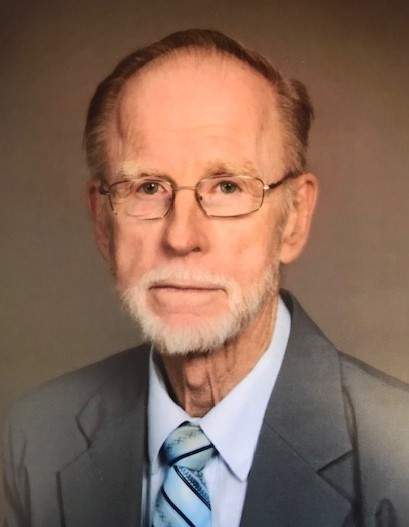 He was born March 2, 1941 in Minneapolis to Margaret Ella (Byers) and Frank Herschel Jones.  Earl grew up on a farm in Cloverton and completed his schooling in the Sandstone area in 1959.

Following high school, Earl served honorably in the U.S. Navy, attaining the rank of Chief Petty Officer and earned his retirement in 1979.

While home for his brother’s wedding, he met the sister of the bride, Marlys Markegard.  The two married on April 27, 1963 in St. Paul, MN.  Together, they had five children and during Earl’s military service, the family moved 21 times, living on both coasts and in Hawaii.

Following Earl’s retirement from the Navy, they resided in Minnesota, where Earl worked in security and facility management for Minnesota Mutual Insurance Company until 1991.  They then moved to Webb Lake, WI where they owned and operated a motel.  They have lived in Wisconsin ever since.

In addition to being a husband and father, Earl was also a devout Christian who worshipped God and studied the Bible throughout his life. During his time in the Navy he led Bible studies, prayer groups, and helped bring others to believe in Jesus. He held various church roles including serving as an elder and treasurer, and showed his faith through the way he lived.

Earl loved nature and animals, especially watching (and feeding) birds. He enjoyed woodworking and carpentry, and always had a few projects going on. Over the years his love of music led him to create an extensive library which you could listen to and not hear the same song twice for a very long time. Anyone that knew Earl knows that he had a passion for cars and motorcycles, especially the classics. While he owned many cars over his lifetime, one of his favorites was his 1961 Mercury Comet. He had a passion for timepieces as well and enjoyed his clocks and watches, and he had a special love of chocolate, ice cream and blueberry pie. Many of these passions have been passed along in his children and grandchildren[BPL1] [BPL2]

A funeral service will be held at 10 a.m., Monday, May 20, 2019, at Zion Lutheran Church, Chippewa Falls with the Rev. Ron Mueller officiating.  Interment with military honors will follow at the Northern Wisconsin Veterans Memorial Cemetery in Spooner.

Visitation will be from 4-7 p.m. Sunday, May 19 at Pederson-Volker Funeral Chapel and one hour prior to the service Monday at the church.

To order memorial trees or send flowers to the family in memory of Earl Jones, USN, Ret., please visit our flower store.