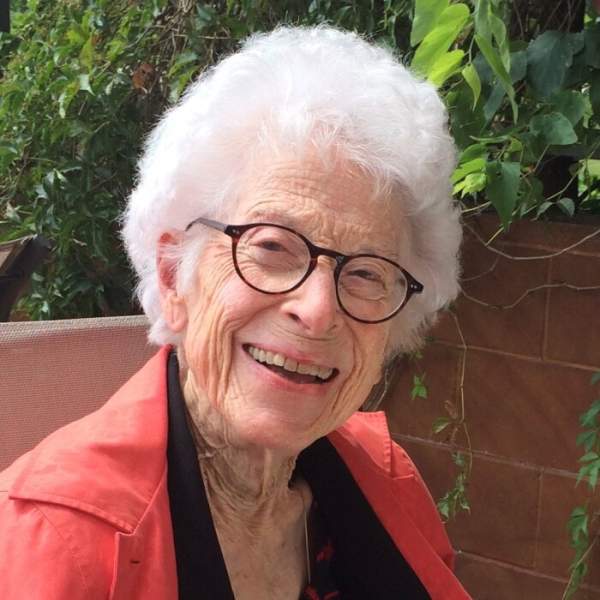 It is with the utmost sorrow that we announce that Edith Jeanette “Edie” O’Connor, 93, of Chippewa Falls, Town of Lafayette, Wisconsin passed away on Saturday, January 23, 2021 with her daughter Catherine by her side.

Edith was born on October 11, 1927, to J. Richard Vacheron, artist, and Dorothy Dopp Vacheron, social worker, in Milwaukee, Wisconsin. Consequently, both art and social justice were a great part of her upbringing (and entire life) but education was Edie’s “raison d’etre”. That and her adoring family and friends.

When she was ten years old, Edith’s family moved to Mequon, where she attended Cedarburg High School. Edith continued her education at the University of Wisconsin, Madison. (Edie often commented that being accidentally paired with a senior roommate, when she was a freshman, provided a most interesting education in itself.)

As a French Language graduate student, Edith taught and also developed a French studies program with the local television station. While in Madison, she received a second Master’s degree in library science, led overseas bicycle tours, assisted in the Theatre Department with costumes and make-up, and even managed to find the time to co-author an exemplary book for children, “Voici Henri” (“Here is Henry”). It was also in Madison where Edith met the love of her life, Ralph O’Connor, when he happened to take a night course offered by the captivating Miss Vacheron. The two married on March 28, 1959.

Word of Edith’s abilities traveled, so when Edith and Ralph relocated to Chippewa Falls, a French language professor at the nearby University of Wisconsin in Eau Claire (UWEC), Barbara Rolland, approached Edith about joining the faculty. Edith truly exemplified the term educator, thrilling in her ability to inspire others with the love of learning, not only molding future French language teachers, but enlarging the lives of many others.

Her service to the University did not stop with teaching the French language, phonetics and French history. Edith was instrumental in developing Folk Fair. Designed to raise public awareness of foreign cultures, it was an annual event that brought large crowds to campus. She also helped to establish the Salon Francais and served as its advisor for many years. She served as an instructor overseas many times through UWEC’s study abroad program. She and Barbara Rolland wrote a beginning French textbook that would go on to be widely respected and used throughout the country. Not stopping there, Edie and Barb went on to develop the English as a Second Language (now English as a Foreign Language) program. The Edith O’Connor Scholarship was created in Edith’s honor after her retirement in 1996.

Edith was an exceptional woman. She possessed a vibrance, a warmth, a generosity of heart, a wicked intelligence and a soul of such wit and verve that she touched all whom she met.  She relished traveling, both across the United States and abroad, especially  France where she and Ralph would visit friends and old haunts. She was a member of St. Simeon's Episcopal church for over 50 years. She loved aiding worthy causes and was a longtime, highly-engaged member of both the Chippewa County Democratic Party, discussing politics and “getting out the vote”, the Eau Claire chapter of Kiwanis, and The State Theatre, where she was instrumental in founding the Friends of the Eau Claire Regional Arts Council.

Edith is survived by her daughter, Catherine O’Connor (of Los Angeles, California, formerly of Chicago, Illinois) with whom she shared an indelible bond and an uplifting life of love, light and laughter. Edith was as accomplished at motherhood as she was at everything else. Both Edith and Ralph enjoyed many years of attending Catherine’s theatrical events in both cities.

She was preceded in death by her parents; her adored husband, Ralph; many close friends and colleagues; and the beloved pets she rescued over the years.

A socially distanced, walk-through only visitation will take place on Sunday, January 31st, 2021, from 1 to 3 p.m. at Pederson-Volker Funeral Chapel in Chippewa Falls. Memorials are not expected but, if one is so moved, please consider a donation to the social cause of ones choice.

To order memorial trees or send flowers to the family in memory of Edith O'Connor, please visit our flower store.