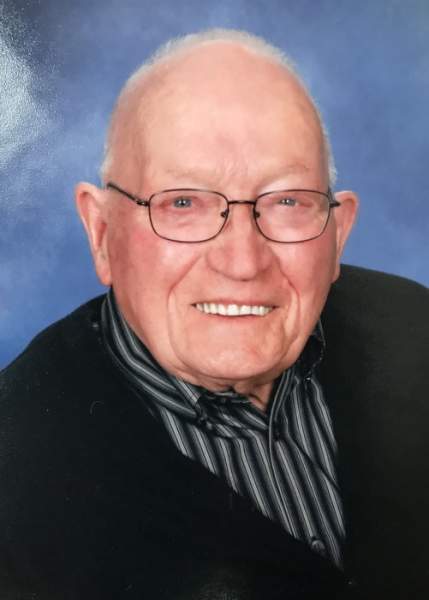 He was born in St. Paul, Minnesota on February 3, 1923 to Frank and Mary (Coverdale) Proue.  He had one older sister, Muriel (Steele), one younger sister, Carole (Henley) and an identical twin brother, Richard.  His mother died of cancer when he was four years old and Ed and his brother were sent to Sheltering Arms Orphanage until the age of eight.  After his father remarried, he lived with his father and stepmother until the age of 16 when he was sent to work on his dad’s cousin’s farm in Bloomer.  In 1945, Ed left the farm and was soon drafted into the army.  He served in the army for seven years, with five of them spent in Japan.  He received several awards including the Good Conduct Medal, the World War II Victory Medal, the Army of Occupation Medal with Japan Clasp, the National Defense Service Medal, the Korean Service Medal, and the United Nations Service Medal.  Following his time in the army, he served an additional five years in the National Guard.

Ed worked for the U.S. Postal Service for 25 years and after he retired was a custodian for 21 years at Central Lutheran Church in Chippewa Falls.  Ed was an active member of the Boy Scouts of America for over 50 years and 18 of these were spent serving as a scoutmaster.  His three sons and seven of his grandsons achieved the rank of Eagle Scout, the highest rank in Boy Scouting.  Ed earned the Arrowhead Award, the Silver Beaver Award, the Wood Badge, the District Award of Merit, the Scouter’s Training Award, the Scoutmaster’s Key, and the Lamb Award.  He was also an active member of Central Lutheran Church for 64 years where he was awarded the Faithful Discipleship Award.  He was a member of the Chippewa Falls Optimist Club, the American Legion, and on the Housing Authority Board.

Ed loved spending time outdoors fishing, feeding the birds and squirrels, and relaxing with his coffee cup in his hand.  He also enjoyed doing word searches, puzzles, and visiting with family and friends.  He loved his birthday parties, which always had a theme and bingo was always played.  He is truly a friend to all he meets.  He always had a story and inspirational memory to share and will be missed by all who loved him.

Visitation will be held from 4-7 p.m., Wednesday March 13 at Pederson-Volker Funeral Chapel with a Military Walk-Through at 4:30 p.m.

In lieu of flowers, please send donations either to the Boy Scouts of America, Chippewa Valley Council or Central Lutheran Church in memory of Ed.

To order memorial trees or send flowers to the family in memory of Edward Proue, please visit our flower store.