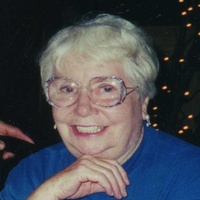 Evelyn Gene (Van Til) Jenson, a resident of Chippewa Falls since 1989, died late Saturday afternoon of respiratory failure. She was 94.

She taught for many years at Taylor University in Upland, Indiana, where she was frequently recognized for outstanding teaching. She later taught at Hong Kong Baptist College in Hong Kong, and at Texas A&M University in Kingsville, Texas, where she founded a children’s literature program.

While teaching in Wisconsin and in Texas, she was awarded numerous humanity grants for presenting lectures on Indian and Hispanic literature and lore of the respective areas.

In the 1950’s, Evelyn was chosen to participate in President Eisenhower’s Experiment in International Living program and resided with a family in the Netherlands. She traveled widely and was a host of Japanese and Chinese students while residing in Eau Claire.

Yet she often cited her most daring achievement as traveling down a mountainside in the Grand Canyon on a donkey.

Dr. Jenson was born in Lansing, Illinois on July 8, 1924, where her father had a fruit market. She was preceded in death by eight brothers and sisters, and many relatives. She is survived by the families of her nieces and nephews: Carole Bakker of St. John, Indiana, James Boldenow of Grand Rapids, Michigan, Jerry Boldenow of Beverly Shores, Indiana, Ron Boldenow of Bend, Oregon, Chris Fawks of Carrollton, Texas, David Gillespie of Eagle River, Alaska, Lucille Huizinga of Chenango Forks, New York, Ruth A. Santefort of St. John, Indiana, Linda Schoon of Highland, Indiana, Shirley Stevens of Mantua, Ohio, Robert Van Til of Dallas, Texas; and her husband of 49 years, John R. Jenson of Chippewa Falls.

A memorial service will be held at 11 a.m., Saturday, September 29 at the First Presbyterian Church, Chippewa Falls. She will be interred in the family cemetery in Lansing, Illinois.

Visitation will begin at 10 a.m. Saturday at the church.

In lieu of flowers, bequests may be sent to the Endowment Fund of the First Presbyterian Church, Chippewa Falls.

First Presbyterian Church
To order memorial trees or send flowers to the family in memory of Evelyn Jenson, please visit our flower store.