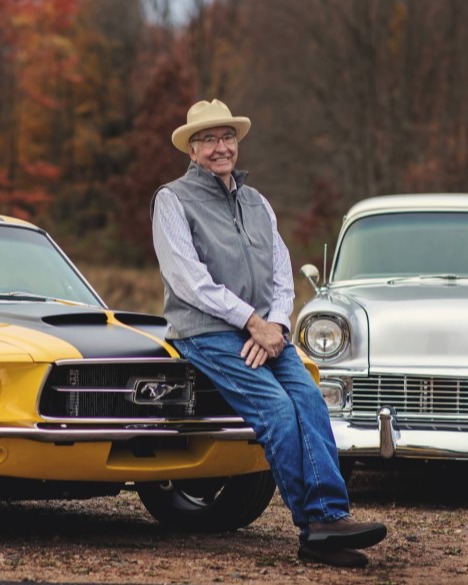 Gary L. Krumenauer, age 72, of Chippewa Falls, died peacefully at his home under the care of St. Joseph’s Hospice on Friday, January 20, 2023.

He was born December 24, 1950, in Chippewa Falls to Jacob and Bernice (Boos) Krumenauer. He graduated from “Chi-Hi” in 1969. Gary continued his education at Chippewa Valley Technical College, earning a degree in business administration.

On August 5, 1972, he married Barbara Mohr at First Congregational Church in Bloomer.

Gary’s work history was long and diverse. After a stint in the Civilian Conservation Corps at age 14, Gary worked at Jim Falls Dairy through a work-study class, which meant leaving his seventh-period class and working at the dairy until 11 p.m. His next job was at Peter’s Meats, where he earned his spending money. After that, he became the service manager at Henry Anderson Motors in Chippewa Falls; and then held similar jobs at Markquart Motors, Bothun Dodge, and Ken Vance Motors. That work led to his career in the insurance industry, first as an appraiser on damaged cars, and then several advancements until becoming president/CEO of Eagle Point Mutual Insurance Company. He credited his success in the insurance industry to three things: “I never met a stranger, I treated everyone honestly, and I always hired people smarter than me,” he said. “I didn’t reinvent the wheel. I found the best wheel and held onto it.”

Gary’s pastime passions were showing cattle, restoring tractors, and building hot rods. He and his daughter Emily traveled each year to Denver, Colorado, to show their award-winning Highland beef cattle. Over the years, they proudly won more blue ribbons than anyone else ever achieved! Gary also loved searching for old cars to buy, his most recent project was a 1956 Chevy Bel Air. Other pastimes that Gary enjoyed included hunting, fishing and farming. He loved the outdoors, exploring the woods, landscaping conservation projects, and traveling.

Gary will be dearly missed by his wife of 50 years, Barb of Chippewa Falls; daughters, Jessica (Dramus) Peuse of Eau Claire, Erika (Ryan) Swansen of Chippewa Falls, and Emily Krumenauer (Ryan Klingaman) of Eau Claire. He also leaves behind his beloved grandchildren, Sam and Amelia Peuse and Jana and Andrew Swansen; his siblings, Dennis (Sharon) Krumenauer of Holmen, Jane (Mark) Kellen of Bloomer, Monica (Tom) Bleskacek, and Karen Connell all of Chippewa Falls; his favorite nephew, Thad Smith, as well as many nieces, nephews, and other loving family and friends.

He was preceded in death by his parents; a nephew, Michael Connell; and in-laws Doris and Arthur Mohr.

Gary’s family wishes to thank the staff of St. Joseph’s Hospice for the wonderful care they provided.

Memorials in Gary’s honor may be designated to NextGen ALS who is dedicated to finding a cure for genetic ALS or the ALS Foundation for research and in hopes of one day finding a cure. Gary had ALS, but ALS didn’t have Gary.