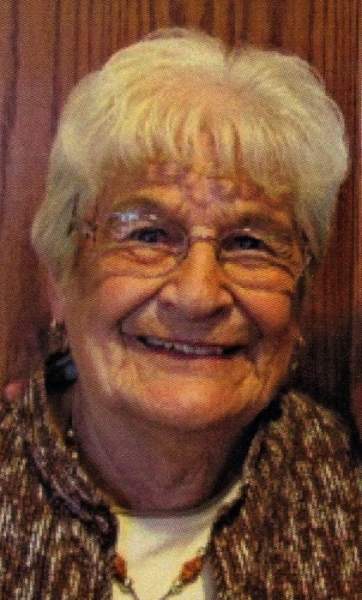 Hazel “Hess” Beatrice Morrison, 97, of Chippewa Falls died Wednesday, May 8, 2019 at Lake Hallie Memory Care while under the care of St. Joseph’s Hospice.

Hess was born October 8, 1921 in Deposit, NY, the daughter of Gerard and Mildred (Hamblet) Hessinger. After graduating from Deposit High School, she attended the School of Nursing at Johnson City, NY and graduated in September 1944 as a Registered Nurse specializing in surgery. Hess enlisted in the US Army Nursing Corps toward the end of WWII and served in Manila. While in Manila, a dashing young Navy Lt. Commander from Menomonie, WI chose her for a date to a party aboard a fleet of minesweepers. “You could step from one minesweeper to another and party all the way” said Hess. After Manila she finished her Army career as a First Lt. in Japan.

On October 6, 1946 she married that dashing young man, Earl Morrison, in Deposit, NY. They lived in Santa Fe, NM for 10 years, then moved to Chippewa Falls. Hess worked as a RN at St. Joseph’s Hospital from 1963-1988, retiring as Nursing Supervisor.

She was preceded in death by her husband, Earl in 1999; her parents; her brothers, Harold & Ray Hessinger; and sister, Myra Spano.

Hess had a full life of helping those in need, a life of caring and sharing. She was a member of First Presbyterian Church and volunteered for Girl Scouts, Meals on Wheels, Literacy Volunteers of America, Chippewa Falls Mentor Program, Open Door Clinic, and Red Cross Bloodmobile for 21 years.  When she was not busy with volunteer work she loved to play golf and bridge.

The family wishes to thank the staff of Our House Assisted Living, Lake Hallie Memory Care, and Aaron of St. Joseph’s Hospice for the loving care they gave Hess.

A funeral service will be held at 12:30 p.m., Thursday, May 16 at First Presbyterian Church, Chippewa Falls with Rev. Barry Boyer officiating. Interment will be at Forest Hill Cemetery, Chippewa Falls.

Visitation will be from 4-7 p.m., Wednesday, May 15 at Pederson-Volker Funeral Chapel and also 1/2 hour prior to the service at church.

In lieu of flowers memorials are preferred to First Presbyterian Church, or the Community Foundation of Chippewa County in the name of Hazel Morrison.

To order memorial trees or send flowers to the family in memory of Hazel "Hess" Morrison, please visit our flower store.