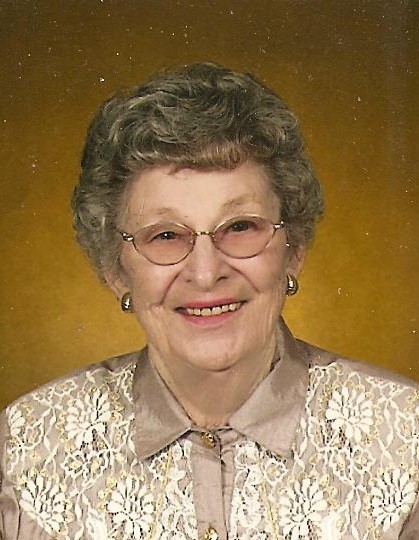 She was married to Lester Harold Paulson on June 11th, 1949 in Aberdeen, S.D.  Their union was blessed with one child, Lester Cole Paulson.

She was preceded in death by her parents, husband Lester, her brother Howard Cole, and many on the Paulson side of the family.

She graduated from LaMoure High School in 1941, then attended Valley City State Teachers College and Interstate Business School.  She worked in the Merchants National Bank in Fargo, First State Bank of LaMoure and in the U. S. Post Office in LaMoure.

Jeanette was very busy as a volunteer with organizations including Order of the Eastern Star, Legion Auxiliary, First Presbyterian Church, and Cub Scouts.  She was Worthy Matron of the OES in 1955 and 1964, District Deputy, and Secretary of the Chapter. She was the founding Mother Advisor for Rainbow for Girls.  Jeanette was an elder for the First Presbyterian Church of LaMoure and on the Presbytery and Synod assignments.  Jeanette was the first WWII Department President for the American Legion Auxiliary.

She and Lester enjoyed travel to many American Legion Conventions, as delegates and attendees, and also to National Postmaster’s conventions. Many summers were enjoyed at the Lake Lida cottage with the Cole, Paulson, and Aspelund relatives.

Jeanette and Lester traveled to Texas for winters right after retirement, but also got to Hawaii, and Arizona to visit for the winter with friends and relatives.  They spent time with her aunt Elsie Lere when she was in need of a caregiver in Sun City, Arizona.  The Sun City condo became home to Jeanette for 26 years, with her and Les returning to North Dakota in the summers. In 2008 she moved back to LaMoure, living in the Rosewood Court and later the St Rose Care Center in 2015. Her move to Chippewa Falls, WI in 2017 put her closer to family and allowed for many happy visits.

Bridge and Bingo were always a part of the fun, and crossword puzzles were another challenge that kept her mind sharp.  She read a book a day, especially Danielle Steel. Jeopardy was also entertainment on most afternoons. In Arizona, she followed the Diamond Backs on TV and saw them in Bank One Ballpark, and often in Spring Training. She also followed the Twins, and saw a game with family at the new Target Field.

With church, The US Postal Service, Legion Auxiliary, reading, and Bridge to keep her busy and active, Jeanette lived a fun, full and fruitful life.  We will all miss her, and any donations can go to the First Presbyterian Church of LaMoure, N.D. or Faith Presbyterian Church, Sun City, AZ.

The family would like to thank the special, caring staff of the Chippewa Manor for their love and support. A celebration of life will be held later this year in North Dakota, when travel and assembly are safe again.

Expressions of sympathy during this time can be left on the condolences page available with the obituary on this website.

To order memorial trees or send flowers to the family in memory of Jeanette Paulson, please visit our flower store.