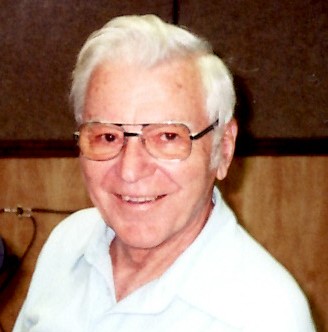 Jerome “Bud” A. Padrutt, 101, of Chippewa Falls, died peacefully under the care of St. Joseph's hospice at the Rutledge Home on Monday, August 9th 2021.

He was born July 26, 1920 in Sauk City, Wisconsin to Susan (Bohnert) and John Padrutt. His family moved to Chippewa Falls when he was a young boy. He graduated from McDonell Central Catholic High School in 1938. When the US entered WW2 Bud enlisted in the Navy. He saw action in the South Pacific aboard the escort carrier USS Kitkun Bay. As a photographer’s mate 1st class, he flew aerial reconnaissance missions from the carrier. He also photographed battles including Midway, Leyte Gulf and the Philippines. At the end of the war, he photographed one of the Japanese surrender ceremonies and some of the war damage in Tokyo.

Bud married Ethel M. Peterson on May 16, 1947 and opened Padrutt Photo Service in Chippewa Falls the same year. After many successful years of business, he retired to Florida in 1976. Shortly after the death of his second wife Bertilla, in 2005, he had a full knee replacement. He returned to Chippewa with his son Michael and Grandson David where he recovered from his surgery.

Bud joined the Chippewa Falls Senior Center where he was an active member who routinely called bingo. He liked to fish, and in the summer he would ride his three wheeled Schwinn around Chippewa and harvest interesting wood to use for his wood turnings.  Bud was an ardent woodworker and spent many happy hours turning craft items on his lathe in Mikes shop.

After a hospitalization with pneumonia in 2017 he moved into an assisted living apartment at Wissota Place and eventually the Rutledge home. In his lifetime he witnessed the incredible transformation of society into what it is now and experienced both the best and worst of mankind. He had an infectious smile and tranquil demeanor, and will be sorely missed.

He was preceded in death by his Parents; brother, Arthur; and sisters, Rose Tietz and Carol Julyan.

To order memorial trees or send flowers to the family in memory of Jerome "Bud" Padrutt, please visit our flower store.