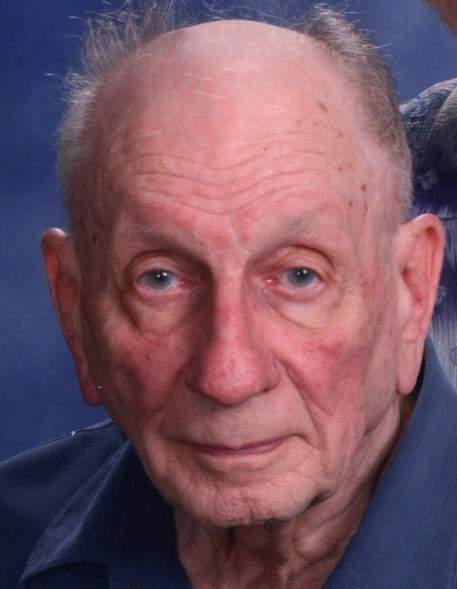 John “Jack” Piper Emanuel, 95, of Chippewa Falls, Wisconsin, went home to his Savior October 21, 2019, in hospice with loved ones.

Jack was born July 28, 1924, to Ida Mae (Piper) and Otto Herman Emanuel in Eau Claire. He attended and graduated from Augusta High School and then enlisted in the Army in 1942.  He was sent to school in Missouri at Great Lakes base Illinois Champaign to learn communications for his service in the Burma-Indo-China Theatre from then until 1945. Jack remained in contact with his Army buddies until the last one passed.

When Jack returned stateside, he attended the University at Eau Claire where he met and married his bride of 70 years, Geneva Steinmetz. While finishing his accounting degree at the University of Madison, Geneva was teaching at Pyburn Elementary School.

After graduating from Madison, he moved back to Augusta and worked for his dad in the Emanuel Meat Market until starting employment with Presto Industries for twenty-five years as their credit manager. In Chippewa Falls he and Gen raised three daughters, were actively involved in Zion Lutheran Church as a trustee, usher and treasurer. He enjoyed his colleagues while working for Leinenkugal Brewing Company.

Jack enjoyed Friday night fish fries at his in-law’s, Art and Erma Steinmetz, playing cards with neighbors and friends – John and Donna Antolak, Mary and Wally Steinmetz, Gladys and Hank Lompa, Ed Lemke, Herb and Adone Rihn, and Arlene and Joe Hakes while all the kids had a big time forming lifelong friendships.

Jack and Gen traveled to many places which included, Alaska, California and Arizona. But the highlight of their traveling was a Mediterranean Cruise given to them by their daughters.

Fishing in Canada, pheasant hunting in South Dakota (with his Emanuel/Dailey cousins), deer and elk hunting in Wyoming, and duck and deer hunting in Wisconsin ---- He was fortunate not to be out on the water when the Armistice Blizzard of 1940 struck those on the Mississippi River. He and his son-in-law, Rudy Holevatz enjoyed many days bagging turkeys and hanging out on his hunting property near Eleva, Wisconsin.

Summers found Jack and Gen up at the lake entertaining family and friends. The sound of the loons and 4th of July fireworks were truly music to his ears. Being on the water and hanging with family is something they truly cherished. Jack also enjoyed having his granddaughter Jessica back in Wisconsin, driving her to daycare each morning.

Jack was an avid sports fan and enjoyed watching the Packers, Badgers, and local sports team. He enjoyed documenting the girls showing their horses, sheep, and dogs at the fair with his movie camera. Jack bravely took a short ride on Colette’s horse Peaches. Most of his movie reels ended showing hundreds of fish caught in Canada.

He was preceded in death by his parents; brother, Richard Emanuel (our dear Uncle Dick), and son-in-law Rudy Holevatz.

Jack is survived by his wife of 70 years, Gen; daughters, Jennifer Holevatz and Lynette Emanuel, both of Eau Claire; Colette Emanuel of Petaluma, California; granddaughter, Jessica Kurowski (Matt) Whitlow; great-granddaughters, Piper and Nora Whitlow of Milwaukee; and sister-in-law, Betty Emanuel of Appleton, WI; along with many nieces, nephews and other relatives.

Services of remembrance will be held Friday, October 25, at 11:00 a.m. at Faith Lutheran Church in Chippewa Falls with visitation starting at 9:00 a.m. Rev. Dan Wonderly will be officiating. Interment will be in Forest Hill Cemetery with full Military Honors conducted by the Chippewa Falls Patriotic Council, followed by a lunch served at the church, with Jacks favorite dessert, chocolate ice cream with chocolate sauce and RC Cola.

In lieu of flowers, memorials are preferred to the donor’s choice.

To order memorial trees or send flowers to the family in memory of John "Jack" Emanuel, please visit our flower store.