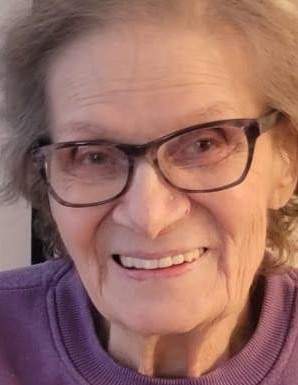 Josette A. Jewett, 90, died peacefully on Friday, January 14, 2022, at her home at Havenwood Senior Living in Onalaska, WI after a battle against lung cancer.

Josette is survived by her son, Dennis (Heather) Downing and two stepchildren, Darrell “Buster” (Marilyn) Jewett Jr. and Sally (Jack) Purvis; and sister-in-law, Ruth Ann Jewett. She was preceded in death by her six siblings, and her husband, Darrell Lloyd Jewett Sr, they were married 47 years.

Josette was born in Dudelange, Luxemburg.  She worked at a G.I. hospital in Germany where she met her first husband, Wayne Downing.  They moved to the United States in 1957, after her son Dennis was born.   In 1961, she married Darrell.  They were the owners of the Lincoln Café, in Burbank, CA.  She became a U.S. Citizen in 1971, of which she was very proud.  She also worked at Toppers Market and was in the catering business.  They truly enjoyed fishing and camping.

She was the loving grandmother, “Bomi,” of five grandchildren, Jennifer, Christi, Alexis, Sharna, and Denny; and twelve great-grandchildren.  She is the beloved daughter of the late Franz and Florentina Palusch of Luxemburg; loving aunt to her nieces and nephews and numerous great-nieces and nephews; and a loving cousin to many that resided in Europe.

She lived in Burbank, CA until May 15, 2021, making the move to Onalaska, WI.  Shortly after her move she discovered she had a lung cancer.

A special thank you to the Mayo Home Health and Hospice team and Havenwood Assisted Living for her care these last few months.

A private family service will be held.  Burial will be at Forest Hill Cemetery, Chippewa Falls.

To order memorial trees or send flowers to the family in memory of Josette Jewett, please visit our flower store.