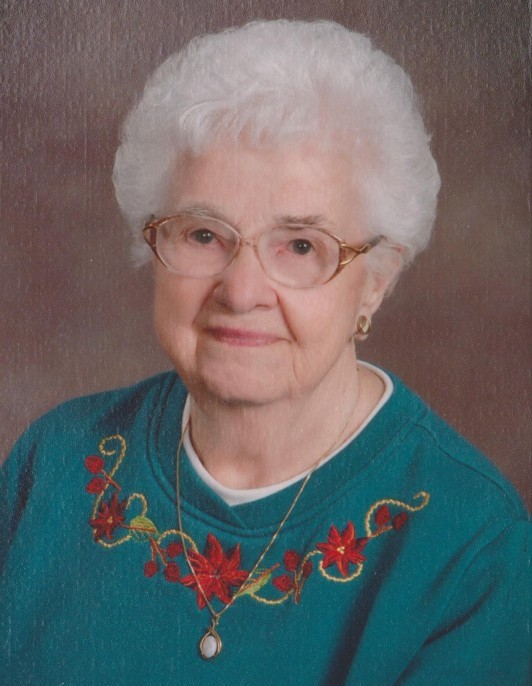 She was born on March 22, 1921, at the family home in Colburn Township near Cadott, to Selma (Larson) and Joseph Nelson.  Joyce graduated from Stanley High School in 1938 as class valedictorian.

She attended one year at what is now the University of Wisconsin – Eau Claire. In 1940 she began nurses training at the Luther Hospital School of Nursing, graduating in 1942. With other graduates she joined the 44th General Hospital unit US Army in 1943 and was an Army nurse until 1946. She served in Australia, Dutch New Guinea, and the Philippines as well as stateside.

On June 19, 1948 Joyce was united in marriage to Steve Kiraly in Chippewa Falls. Together they had two daughters, Kristine Jo and Klare Ann. In 1948 Joyce began work at St. Joseph’s Hospital in Chippewa Falls, retiring in 1984. Steve died in October of 1984.

On March 22, 2001, Joyce married Paul Halldorson in Yuma, Arizona. Together they spent time in Bellingham, WA. And Yuma, AZ. Paul died in October 2009. Joyce then resumed her residency in Chippewa Falls, WI, before moving to Albert Lea, MN in February of 2018.

Joyce was a long- time member of Central Lutheran Church, very active in her Circle and the WELCA organization. Joyce enjoyed playing 500 with friends, watching sports, particularly the Brewers and the Packers. She enjoyed having the opportunity to watch her grandchildren and great-grandchildren grow and play.  Throughout her life Joyce was a people-person, making acquaintances wherever she went. She was able to speak with anyone.

Joyce was preceded in death by her parents; her husbands; grandson, Adam Johnson; her brother, Lloyd and his wife, Geraldine Nelson; sister, Florence Nelson; brothers, Emery Nelson and Semore Nelson; as well as members of her husbands’ families.

Joyce will be fondly remembered by all who knew and loved her.

A memorial service will be held at 11 a.m., Saturday, October 5 at Central Lutheran Church in Chippewa Falls, with the Rev. Aaron Sturgis officiating.  Burial with military honors provided by the Chippewa Falls Patriotic Council will be at Prairie View Cemetery.

A visitation will be held for family and friends one hour prior to the service Saturday at the church.

To order memorial trees or send flowers to the family in memory of Joyce Halldorson, please visit our flower store.