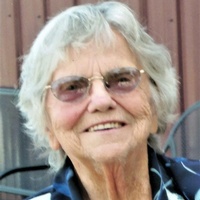 She was born June 10, 1925 in Rusk County to Doris (Wiles) and Jack Plummer. She graduated from Chetek High School, then moved to Chicago.

After living in Chicago for seven years, she moved back to the area and on April 21, 1951, she married the love of her life, Robert E. Young. Together they had five sons.

June was a born caregiver and spent her entire life caring for others. She worked for over 20 years as an aide at the Northern Center in Chippewa Falls; then worked for Chippewa County Waysides, where she supervised a crew of disabled adults cleaning the waysides; and spent 20 plus years working with the VIP – Visually Impaired Persons. She also volunteered her time bringing people to their appointments and shopping.

June enjoyed spending time with her family; being outdoors; reading; writing; and painting. She was an activist and worked hard for her fellow union employees of the State of Wisconsin. Because of her son, Jack, she was an advocate for the developmentally disabled and was instrumental in getting special needs children integrated into the schools. She also played an important role in the Chippewa County Development Center (now known as CRI), where Jack has worked for 37 years.

She was preceded in death by her parents; her husband, Robert; sons, Patrick and Nick Young; two grandchildren, Kevin and Jennifer Young; and two sisters, Peg Smith and Lee DeMars.

Visitation will be held one hour prior to the service Tuesday at the funeral chapel.

June’s family would like to thank the staff at the Clearwater Care Center and the staff and friends at the Chippewa Manor Apartments for the compassion and love shown to June.

June’s favorite quote was, “I’ll live ‘til I die”…and that she did!

Memorials may be given in June’s honor to the Special Olympics or to Irvine Park in Chippewa Falls.