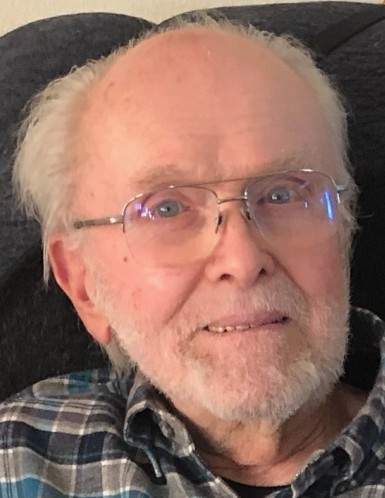 Kenneth H. “Kopy” Schoenberg, 89, of Lake Hallie, passed away August 11th at his home under the care of his family and St. Joseph’s Hospice.

Ken was born Jan 5, 1932, in Eau Claire to Harry and Myrtle (Riley) Schoenberg. After graduating from EC High School, he enlisted in the U.S. Air Force and served in Korea from 1950-1953. Ken met Margaret Hays at Leo’s roller rink, and when he returned from Korea, they married at Holy Ghost Church in Chippewa Falls. They were married 68 years and raised 8 children. He worked at Uniroyal for 37 years, while simultaneously owning and operating Schoenberg Excavating for 30 years.

Ken always said he grew up in the greatest neighborhood in the world, and his neighborhood pals (The First Crossing Gang) were lifelong friends. They, and his family, will remember many ‘Kopyisms,' among them “Don’t Tell Your Ma,” “I’m not afraid of butter!” and “Mum’s the word." His workshop was a hub of employees (including his 4 sons and 1 of his daughters) and friends alike. Friends knew Kopy probably had the right tool or equipment, or at least something passable! Travel any WI county with Kopy, and he would inevitably know someone there. Their house was, and still is, called "Grand Central Station" because the back door was always open and used by many.

Ken was preceded in death by his parents; sister, Delores Hansen; and grandson, Jay Schoenberg.

A celebration of life for Kenneth H. "KOPY" Schoenberg will be held on Sun Oct 17 from 1-4 at the Irvine Park Activity Building. Military burial is scheduled for Mon Oct 18 at 1 pm at the Northern WI Veteran’s Memorial Cemetery Spooner WI. Please join the Schoenberg family as we share memories and honor his service.

To order memorial trees or send flowers to the family in memory of Kenneth Schoenberg, please visit our flower store.