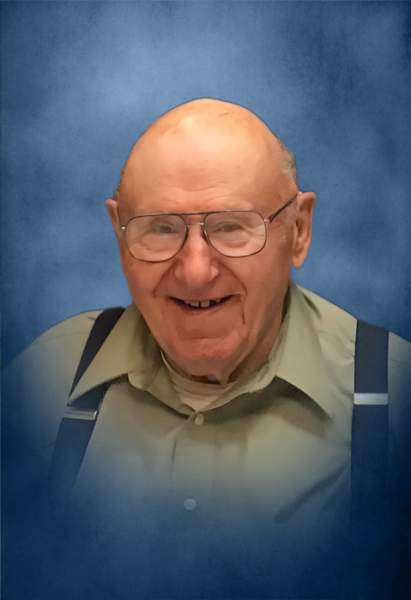 Kenneth George Wheeler,  of Wissota Place, formerly of Cadott, met his Lord and Savior on July 12, 2022 at the age of 98.

Kenneth was born May 19, 1924 to Harry E. and Edna O. (Cripe) Wheeler at their home in rural Rock Falls. He graduated from Chippewa Falls High School while working for his Uncle Everett at Cripe’s Dairy.  Ken served in the State Guard during WWII as a serious injury kept him from being drafted. After the war the State Guard was disbanded, he then joined the National Guard serving until 1956, retiring with the rank of Sgt. 1st Class.

Ken married Marion Meddaugh on March 26, 1944 in Chippewa Falls where they resided until moving to the farm in Cadott. In 2018, they moved to Wissota Place.

Ken was self-employed as Wheeler Radio Electric until 1966 when he was employed as an electrician at Presto Industries and later at Uni-Royal. Given time, Dad could fix almost anything, often manufacturing parts to repair everything from appliances to farm machinery and more. He loved old tractors and Cub Cadet Lawn Tractors. He was a member of Chippewa Valley Antique Engine and Model Club, sponsors of Pioneer Days and many other organizations. Through the years he served on many church and Bible Camp boards, taught Sunday School, lead youth groups and served in whatever capacity was needed.

He was preceded in death by his parents; his wife of 74 years, Marion, in 2018; infant son, Wayne; brothers, Allen and Leigh; sister-in-law, Donna Wheeler and brother-in-law, David Hempelman.

A funeral service will be held at 11:00 AM, Friday, July 15, 2022 at Pederson-Volker Funeral Chapel, Chippewa Falls. Kenneth’s son, Ronald Wheeler will officiate. Interment will follow at Forest Hill Cemetery, Chippewa Falls. Military Honors will be rendered by the Chippewa Falls Patriotic Council. Visitation will be held from 4:00-7:00 PM, Thursday, July 14, 2022 at Pederson-Volker Funeral Chapel and also one hour prior to the service on Friday morning.

Pederson-Volker Funeral Chapel and Cremation Services has been entrusted with arrangements. To leave an online condolence or to share a memory, please visit www.pedersonvolker.com

To order memorial trees or send flowers to the family in memory of Kenneth Wheeler, please visit our flower store.