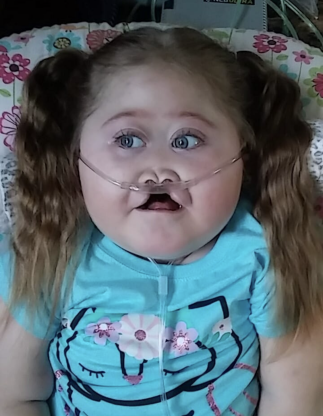 Layla Jeanne Lloyd, age 3, peacefully passed away in her parents’ arms on Saturday, November 24th surrounded by her family.

Layla was born July 9, 2015 in Marshfield, WI, to the parents of Randy Lloyd and Danielle Anderson (Chippewa Falls). Layla was our miracle baby beating the odds since birth. She was born with a rare genetic disorder, semi lobar Holoprosencephaly.

Layla was perfect in every way possible. Although her life was much different than most 3-year old’s, she was loved and accepted by family and friends in every way possible. There was nothing that Layla wasn’t given the opportunity to do. Our mission was to give Layla the same opportunities as any other child and that we did. She adored her big sister and had an unbreakable bond with her cousin Kasyn.

Layla was our little princess, she loved to get dressed up and have her hair played with. Some of her favorite things to do were going for car rides and being outside doing just about anything. She loved butterflies and to watch her aquarium for hours on end. Christmas was one of her favorite times of the year as she would stare at the tree all day and night.

Layla’s life may have been short but it was filled with love and adventure every single day. She has taught us the true meaning of love. There will not be a day that she isn’t in our hearts or minds.

Layla is preceded in death by her maternal grandfather, Gene Hodowanic; and great grandparents.

Private services will be held.

To order memorial trees or send flowers to the family in memory of Layla Lloyd, please visit our flower store.