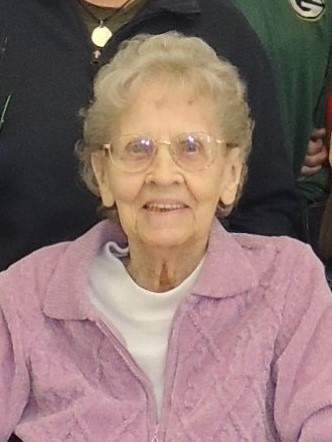 Lorraine Hetty Sukopp was born January 13, 1916, at Luther Hospital in Eau Claire to Hetty C. (Hazen) and James R. Sukopp. She grew up on the family farm in the town of Washington, Eau Claire County and graduated with very high grades from Porter School. At the age of 16, she worked as a nanny for the Johnson family in the Third Ward in Eau Claire.

Lorraine married Harold L. “Tommy” Thompson of Stanley on May 25, 1940, at Grace Lutheran Church in Eau Claire. They lived along the Chippewa River in the town of Eagle Point near Jim Falls for 59 years, until moving to the Chippewa Manor Residential Living Community in Chippewa Falls in April 1999. She became a resident of the Chippewa Manor Nursing Home on Feb. 14, 2018.

In 1950, Lorraine earned her high school diploma by correspondence from the American School in Chicago, Ill. For 12 years, from 1956 to 1968, she was employed in the powdered milk packaging department of the Falls Dairy in Jim Falls until the department closed. After that she was one of the first group of assemblers who worked for Seymour Cray Jr. in his fledgling Cray Research Company in Hallie.

Lorraine was a member of Our Saviour’s Lutheran Church in Chippewa Falls since 1950. She had been a Sunday school teacher and served as the church financial secretary for 32 years, from 1962-1994. She had been a member of the Popple Lake Homemakers Club and was a member of the Jim Falls Senior Citizens.  She loved to play cards and was known for her beautiful crochet projects. Her hobbies included working crossword puzzles, crocheting, knitting, growing indoor and outdoor flowers, gardening, and feeding and watching the birds.

She was witty and loved to tell jokes, but she was also very logical and careful and always conscious of staying healthy.  She was loving and enjoyed life. She was the last living relative in her generation on both her side and her husband’s side of the family.  While living at Chippewa Manor, she attended church services, participated in Bible study, Sunday card night, weekly Bingo, wii bowling, and always helped bake Valentine and Christmas cookies with other volunteers.

A funeral service will be at 11 am, Tuesday, Nov. 30 at Our Saviour’s Lutheran Church in Chippewa Falls, with the Rev. Karen Behling officiating and burial at Copp Cemetery, town of Anson.

Friends may call beginning at 10 am Tuesday at Our Saviour’s.

Memorials to Irvine Park or Our Saviour’s Lutheran Church in Lorraine’s memory would be appreciated.

Special thanks to the Chippewa Manor Staff for Lorraine’s excellent care for the past three years. Also thank you to St. Joseph’s Hospice for their recent care.

To order memorial trees or send flowers to the family in memory of Lorraine Thompson, please visit our flower store.