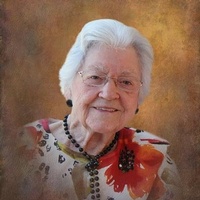 She was born March 27, 1921 in Durand, Wisconsin to Raymond and Jennie (Stanton) Vradenburg. Lucille was raised in rural Durand on her family’s farm, attended school in Durand, and was employed at the Durand Hospital. During World War II she worked at Gillette Defense Plant in Eau Claire and Globe Union in Milwaukee from 1942-45. Lucille married Glenn Barquest on December 15, 1945. They eventually settled in Middleton WI in 1956. Lucille worked at the Ben Franklin Store for 15 years while caring for family and raising three children. Lucille was a member of the Eastern Star, 40 and 8 Cabana 525, several University of Wisconsin-Madison Women’s Groups, and was the director of the Middleton Community Church nursery for several years. In 1982 Lucille and Glenn moved to Eau Claire, WI.


Lucille loved her family and friends, especially her grandchildren/great-grandchildren. She enjoyed knitting, crocheting, sewing, playing cards, berry picking, hiking, camping, traveling and most of all life.

Visitation will be September 8, 2018 from 9 to 10:30 AM, followed by the funeral service at 10:30 AM at the Chapel of the Resurrection, Chippewa Manor, 222 Chapman Rd., Chippewa Falls, WI. Rev. Robert Hoekstra will be officiating. Interment immediately follows the service at Bateman Cemetery, town of Lafayette, Chippewa County, WI. A luncheon will follow at Bateman English Lutheran Church, town of Lafayette, Chippewa County, WI.

In lieu of flowers, memorials are preferred to the family (G. Lucille Barquest Memorial Fund), which will be donated to charities that were dear to Lucille’s heart.

Chapel of the Resurrection at the Chippewa Manor
222 Chapman Road
Chippewa Falls, WI 54729

Chapel of the Resurrection at the Chippewa Manor
222 Chapman Road
Chippewa Falls, WI 54729

To order memorial trees or send flowers to the family in memory of Lucille Barquest, please visit our flower store.