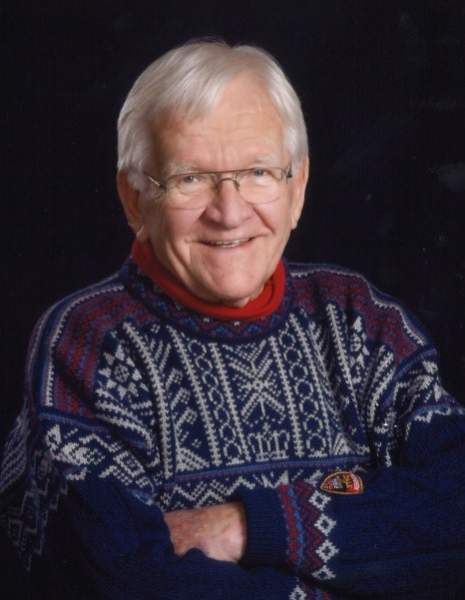 Marcus was born October 27th, 1929, in Chippewa Falls to Frances (Gillette) and John R. Myrman, the fifth of nine children. The family built a beautiful home on Dover St. in Chippewa Falls. When the depression arrived, they moved their home to a large cottage on Pokegama Lake in Chetek. He graduated from Chetek High School in 1948 and attended Superior State College. He served honorably in the U.S. Navy with the Seabees from 1950-1954 during the Korean War.

On January 28, 1953, He married Jane Mair from Chetek and they settled in and raised their family in the Los Angeles area. In 1961 Mark joined the Los Angeles County Sheriff’s Department as a Deputy Sheriff. In 1986 he retired as a Sargent after 25 years of service. Jane preceded him in death on February 14, 1992. Following her passing, Mark moved back to Chetek.

On September 6, 1996 he married Marcene O’Brien. This union created a beautifully blended family; Mark’s three and Marce’s seven, along with spouses, a plethora of grandkids and great grandkids. Together they built a beautiful home on the Chippewa River. The O’Briens eagerly embraced the Myrman tradition of serving Malted Milks at every family gathering. Mark presided over the five spindled malt mixer being stuffed with Olson’s Ice cream, flavors of choice, milk and malt powder. Their move to Chippewa Falls rekindled old relationships and they became very active in their chosen familiar community. Together they established The Marcus Myrman & Marcene O’Brien-Myrman Family Community Endowment Fund and the St. Joseph’s Hospital Endowed Fund.

Mark loved his families and was most generous. He loved fishing and hunting, wood projects and was a consummate handy man to so many. He had a great sense of The Myrman humor and a stubborn Norwegian temperament. He seemed never to age!

The visitation will be from 2-4pm on Sunday, September 19, 2021 at the Pederson-Volker Funeral Chapel, Chippewa Falls. The Memorial Service will be at 4pm with the Rev. Barry Boyer officiating. A private family interment will be at Lakeview Cemetery in Chetek.

Memorials may go to the Marcus Myrman & Marcene O’Brien Myrman Family Endowment Fund ℅ the Community Foundation of Chippewa Falls, St. Joseph’s Hospital or the YMCA of your choice.

Special thanks the Hospice Team from St Joseph’s Hospital and the Classic’s RA Staff, especially Mike and Jamie RN.

To order memorial trees or send flowers to the family in memory of Marcus Myrman, please visit our flower store.