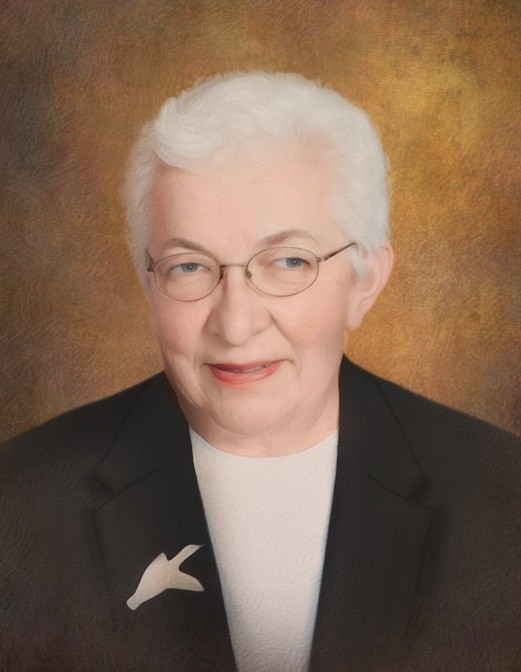 Marilyn was born at home in Bode, Iowa on July 9, 1936 during the hottest fourteen days on record. Marilyn was raised in Humboldt Iowa, being the youngest of five. Marilyn was nine years old when her father passed away. At that time, Marilyn’s sister Joyce (age 14) took on more responsibilities as her mother had to go back to work to support the family. It was during this time that she connected with pets, that included cats, dogs and chickens.

From college until her passing, Marilyn played in numerous musical organizations and groups. This includes: The Green Bay Symphony, Chippewa Valley Symphony (1977 – 1997), The University of MN Symphony and the Rochester Symphony.  She was a founding member of the MJ Consort in 2002, which is still active today.

Marilyn married Roger on July 11, 1959. After the seminary they moved to Medina, ND, which was the first church that Roger served as Pastor. Together, Roger and Marilyn, also served congregations at Zion Lutheran in Shawano, WI and Our Saviour’s Lutheran in Chippewa Falls.  She was very involved in the churches, with music and youth ministry. She directed junior choirs and youth choirs. At OSLC she started the Bell Choir, puppet ministry, and led a variety of musical groups.

Her passion was to lift up others through helping them find their gifts and talents. She was one of the first mentors in the Chippewa Falls School District starting in 1988 until 2020.  She led a book club in the Chippewa County Jail.

Other ways that Marilyn’s passion for the arts and music was lived out was by owning her own piano tuning business for 17 years and by being active with the Wayward Players performing at the Hyde Center for the Arts, performing many plays over the years.  To keep her mind sharp she continued to learn new instruments.  She played the flute, piccolo, piano, various recorders, Scottish Whistle, Bag Pipes and Cello (String Connection).

A funeral service will be held at 11 a.m., Friday, January 14 at Hope Lutheran Church, 2226 Eddy Lane, Eau Claire with Rev. Mary Erickson officiating.  Visitation will begin at 9:30 a.m. Friday at the church.

Interment will be held at a later date at West Valders Cemetery, Valders, WI.

In lieu of flowers the family has requested memorials either to the Audrey (Hanson) Sorlien and Marilyn (Sorlien) Skatrud Scholarship for Flute at Luther College, Decorah, IA, Hope Lutheran Church and/or Chippewa Mentoring Program.

To order memorial trees or send flowers to the family in memory of Marilyn Skatrud, please visit our flower store.