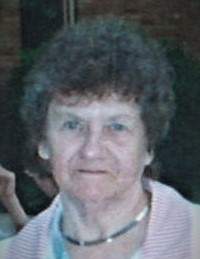 She was born April 24, 1922 to Anna (Lindenthaler) and Walter Glenz.  She was raised in Fall Creek and attended Fall Creek High School.

On August 17, 1940, she married Maynard Stewart in Decorah, Iowa.  They resided in Chippewa Falls until 1970 when they moved to La Crosse. They returned to Chippewa Falls in 1981.  Maynard passed away on May 10, 2005.  Marlene moved into the Chippewa Manor Apts. in 2012 where she made many friends.

She was preceded in death by her parents; her husband, Maynard; and two sisters, Ione DuVall and Virginia Randall.

Marlene will be laid to rest next to her husband in a private family ceremony at Forest Hill Cemetery in Chippewa Falls.

The family would like to express their gratitude to the staff at Chippewa Manor for their care, kindness and friendship given to Marlene over the past eight years.  You were like a second family to her.  Also, special thank you to the third floor staff at HSHS St. Joseph’s Hospital for their care and compassion in Marlene’s final days.

To order memorial trees or send flowers to the family in memory of Marlene Stewart, please visit our flower store.