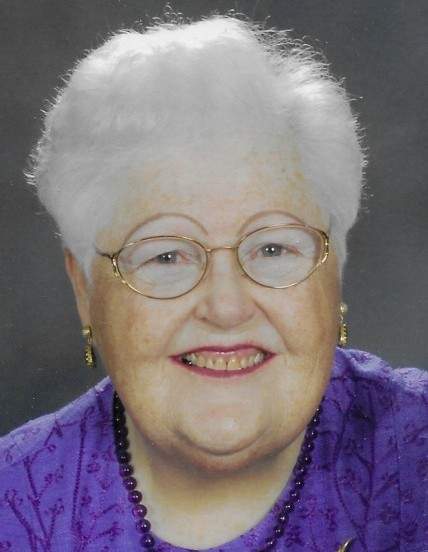 Mary Elizabeth Pearson, age 80, of Rochester, MN (formerly Chippewa Falls, WI) died at home on November 25th, 2019, peacefully, with her daughters at her side.

She was born May 4, 1939, in Minneapolis, MN to Irene (Thomsen) and James Herbert Goodoien. She was the only girl in the family and thoroughly enjoyed growing up with two older and two younger brothers who included her in everything, even playing sports with the other kids in the neighborhood. Her family life revolved around music and faith. Growing up in south Minneapolis, she was involved in her home church of Nokomis Heights Lutheran, including singing in the choir, being involved in youth activities including attending bible camp in the summer and being a confirmation class teacher. She was an accomplished singer and took voice lessons in addition to learning both piano and violin but was best on the piano, playing duets with her mother and accompanying her father while he played violin. She graduated from Washburn High School in Minneapolis, MN, class of 1957. She was a very good student, knew everyone in her class and was also involved in many activities including athletics and music, being a part of “The Casuals” who sang in many places including at the St. Paul Winter Carnival and even made a record.

Mary continued her education at the University of Minnesota – Twin Cities in 1957 and received her Radiologic Technology certification from Swedish Hospital in 1961. After achieving her x-ray tech training, she returned to the University of Minnesota with the goal of pursuing a career in medicine. In 1964, while working for Dr. Y. T. Johnson she had a fall on the ice and fractured her spine which placed her educational pursuits on hold. However, after recovering from several surgeries and episodes of being in a body cast, she was invited to the home of good friends (John and Margaret Claeson) for a party in May 1966 and set up on a blind date with John B. Pearson, Jr. When asked about that first night, she often told people that she came home from the party and told her father that she had met the man she was going to marry. They were married on December 17, 1966.

Mary and John lived in Chippewa Falls, WI, for the first 8 years of their marriage during which time both of their daughters (Elizabeth and Katherine) were born. Mary was a tennis player and teacher and played golf competitively in addition to being an active member of Central Lutheran Church and member of the choir and a sextet (“The Sexy Six”) while in Chippewa Falls.

In 1974, Mary and John moved to Coon Rapids, MN, and Mary sought out a church with a rich music program and joined First Lutheran Church in Columbia Heights, MN. She sang in the choir and was often a soloist for special music throughout the church year. During their 19 years at First Lutheran, Mary was a member of Martha Circle, was a deacon in the church and was elected the president of the congregation. Mary also spent a lot of time volunteering at her children’s schools, her church, and eventually became a part of WAMSO (Women’s Association for the Minneapolis Symphony Orchestra) and was the coordinator for all the ushers and hostesses for the coffee concert series and Sommerfest at Orchestra Hall in Minneapolis.

In 1992, Mary and John returned to Chippewa Falls, and Mary again became involved at Central Lutheran Church where she was a member of Martha Circle, the choir – eventually becoming the choir director and handbell director, and was often found working with the women of the church serving a meal or working on a project. After moving back to Chippewa Falls, she also joined P.E.O., the Chippewa Valley Wildlife Society, and the Chippewa Valley community chorus. She moved to Rochester, MN, to live with her youngest daughter, Katherine, in September 2018.

Memorials are preferred and may be designated to Central Lutheran Church, Friends of the Minnesota Orchestra or Irvine Park.

To order memorial trees or send flowers to the family in memory of Mary Pearson, please visit our flower store.