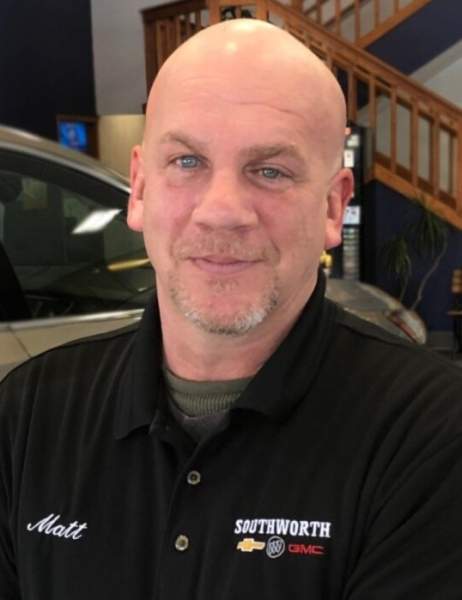 Matthew James Young, 51, of Chippewa Falls, town of Lafayette, died Sunday, March 21, 2021 after a hard-fought battle with cancer at Sacred Heart Hospital with his family by his side.

He was born February 23, 1970 in Elkhorn to Cynthia (Pinnow) and Jim Young.  He grew up in Delavan and graduated from DDHS, class of 1988.  He was a State wrestler and was proudly coined the nickname, “The Terminator.”

Matt found the love of his life, Nancy Decker at a Packer preseason game.  Shortly after meeting, Matt moved to Chippewa Falls to be with Nancy.  The two united in marriage on June 11, 2007 in Las Vegas. It was meant to be and they were a perfect match!

Once living in Chippewa Falls, Matt worked at Southworth Chevrolet.  He loved his job as a service advisor at Southworth and the coworkers quickly became his second family.

Matt enjoyed playing softball, dancing, listening to music, and singing karaoke…he never turned down a mic!  He was always happy and wasn’t just the life of the party, he was THE party!  He will be dearly missed.

He was preceded in death by his grandparents; his father, Jim Young; mother-in-law, Gloria Decker-Francis; and his stepson, Jarrod Gordon.

A funeral service will be held at 12 p.m., Friday, March 26 at Pederson-Volker Funeral Chapel, Chippewa Falls with the Rev. Greg Stenzel of Christ Lutheran Church officiating.  Burial will follow at Bateman Cemetery, town of Lafayette.

Visitation will be held from 10 a.m. until the time of service at 12 p.m. Friday at the funeral chapel.

The service will be live streamed and webcasted at www.pedersonvolker.com/obituary/Matthew-Young.

To order memorial trees or send flowers to the family in memory of Matthew Young, please visit our flower store.