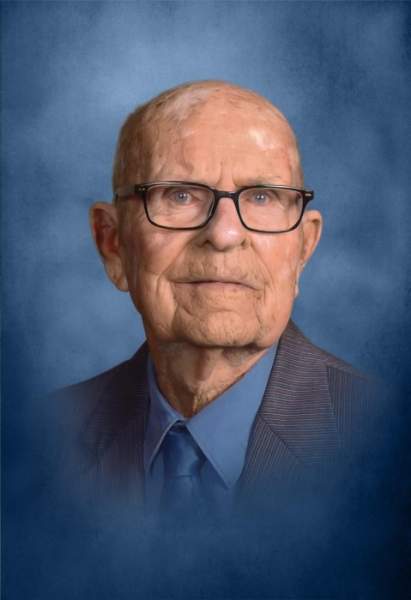 Milford Newman, age 91, completed his journey on earth and went to live with our Lord on April 5, 2021.

Milford “Mil” was born on April 29, 1929, to Helen (Barber) and Truman Newman at their home near Chetek, WI. He attended Gregerson Grade School and graduated from Chetek High School in 1947. Post-Graduation, he attended the Minneapolis Gale Institute of Railroad in MN, studying telegraphy and accounting. He was then employed by the Chicago & Northwestern Railroad at the depot in Spooner, WI.

From 1951-1953, he served in the Korean War stationed at Newfoundland and Labrador. He was Honorably Discharged on February 14, 1953, and married Bernita “Bea” Voelker of Rice Lake on February 28, 1953. They began married life in Cornell with Milford working for the Chicago & Northwestern Railroad.

With the downsizing of the depot, they moved to Rice Lake then Ellsworth and ended up in Chippewa Falls in 1959. His children enjoyed visiting him at the depot watching him utilize his telegraphy (morse code) skills. Milford worked at the depot until its closing in 1971. He was next employed as a bookkeeper for the Cenex Bulk Gas Plant until its closing in 1988. From there, he went to work at John’s Auto Parts until he retired in November 2020.

Milford was a member of Faith Lutheran Church, Chippewa Falls. He served as janitor there from 1961-2014. Milford loved to go camping and fishing with family at his lake place in Chetek. He enjoyed singing in the church choir, breakfast after church with friends and having coffee daily with his buddies.

The funeral service will be held at 11 a.m. on Friday, April 23, 2021, at Faith Lutheran Church, Chippewa Falls, with Rev. Dan Wonderly officiating. The visitation will begin at 10 a.m. Friday at the church. The interment, with Military Honors, will follow at 2 p.m. at the Northern WI Veterans Memorial Cemetery, Spooner, WI.

To order memorial trees or send flowers to the family in memory of Milford Newman, please visit our flower store.