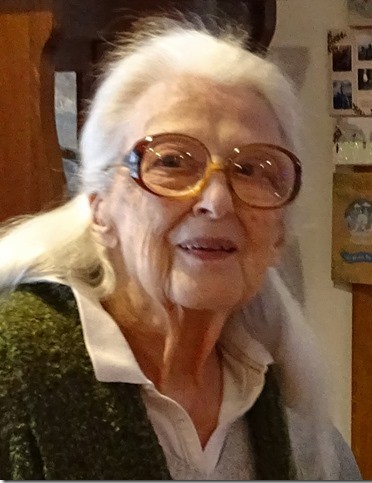 Where, how does one begin the celebration of a life which came within six months of spanning 100 years?

Renee Julia Maddox knew how to live, followed the dictates of her heart and spent her adult life enjoying the pot of gold she found at the end of a rainbow of her own making.  She grew up an only child, always knowing she wanted a big family.  She met and fell in love with George Maddox while attending the American Conservatory of Music in Chicago in the late 1930’s.

Married in November of 1942, the two of them weathered the years of the Second World War, he serving as an Artillery officer in the South Pacific while she waited in Des Moines, Iowa, for the arrival of the first of what would eventually be their five sons.  The war sullied grandiose career plans for her voice major husband and his new bride.  New and different plans evolved of necessity following his safe return from New Guinea just after the Christmas holidays of 1944-45.  Though their life together would ever have music at its core as the ensuing 66 years of marriage elapsed, only the goal of family remained unaltered.  Post-war plans took them and their growing family from George’s home in Mayfield, Kentucky, where second son, Craig, was born, to what was rapidly becoming the suburbs of the thriving and robust city of Chicago.  Thus it was that home became LaGrange Park, Illinois, and remained so until the late 1960’s.  There were born sons Todd, George and Peter, completing the quintet and the big family they planned.

Ironically it was the threat of yet another Chicago winter that finally goaded Renee, George and their family to seek the warmth of Southern California.  Behind them they left not only their lovely two story brick suburban home but also Renee’s challenging position at a classy beauty salon she managed for the several years which followed those exclusively devoted to raising five boys and during which her husband’s work frequently demanded extended travel and significant periods of time away from home.

California provided a new and different environment.  With their oldest son, Steve, serving in Vietnam, three others attending college and the youngest yet in high school, they bought a lovely hillside home in Laguna Beach, CA, overlooking the Pacific Ocean.  This was to be home and “family-central” for many years.  Renee managed a yardage goods store while George continued sales work.  Ultimately their five sons completed their respective and varied educations, found spouses and helped transform raven haired Renee into silver haired “Granny”, a designation she wore proudly the rest of her life.

Eventually the allure of California waned, giving way to the beautiful and compelling changing of mid-west seasons and a move to the Chicago suburb of Wheaton, where she and George kept house throughout the waning years of the twentieth century.  At the urging of eldest son, Stephen, and his wife, Karen, George and Renee relocated to Chippewa Falls, Wisconsin, in late 2004.  Filling her hours as she had for years with music, crocheting, housekeeping, Scrabble and caring for her man, Renee buzzed through her eighth decade, relishing visits from family and rejoicing in these welcoming surroundings.  Her life was to change abruptly in 2009 with the death of her husband.  Still vital and fiercely independent, Renee turned ninety on Christmas Eve Day, 2011.  After George’s passing, she relocated to an assisted living facility.  This served her well until she broke a leg in an uncharacteristic fall, necessitating relocation to a rehab facility in Bloomer to recover.  She was their star resident and was mere days from ready to return home when she fell again, breaking the other leg in much the same place and much the same manner! Her second rehab required much of her both physically and mentally.  When finally she was able to return home, she proved unable to handle the demands of living alone, even with assistance.

Renee came to live with Stephen and Karen at their Lake Wissota home in 2017, less than a month before her 96th birthday.  She remained both capable and generally independent with weekday morning assistance from Visiting Angels for the ensuing 3-1/2 years until another fall, advancing dementia and mounting physical disabilities necessitated a week’s hospitalization and subsequent relocation to Lake Hallie Memory Care.  Her long journey almost at an end, she passed away on D-day, June 6th, 2021.  There seems a mild irony in that particular date which marked the beginning of the end of the war which shaped the lives of her generation.

We began this chronicle of celebration with the question where to begin her nearly 100-year-long story.  In our hearts the story begins with the moment this enchantingly wonderful, self-effacing, loving and generous woman brought us into and made us each a part of her life and her world.  The past few “borrowed years” (pandemic and all) have been years replete with sunshine and striving, happiness and rising to meet the daunting challenges of life.  To our great good fortune, these have been years shared and relished, brim-full of love and accomplishment.  Renee left no cards un-played, nothing of meaning unsaid.  When I think of her today, my mind harkens back to the countless times during my life when she righted my wavering ship with the unpretentious question “Are you sure that’s what you want to do?”  Never meddlesome, never intrusive, always there without reservation for those she loved, Renee used her life and energy to fashion a proud legacy.  There will never be another quite like her.

With deepest love and respect,

To order memorial trees or send flowers to the family in memory of Renee Maddox, please visit our flower store.