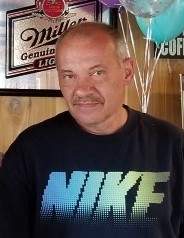 He was born February 8, 1964 in Eau Claire, the son of Judith (Gorton) and Dennis V. Gray.  He attended Cadott schools.

Rick was a compassionate, caring person so it was only fitting when he earned his Certified Nursing Assistant certificate. He worked for area nursing homes caring for the elderly…a job he took pride in and was great at doing.  He also worked as a carpet layer and was a skilled handyman.  In recent years, Rick came to know the Lord and he shared the gospel with many in hopes of helping others as it had helped him.

Rick enjoyed fishing, cooking, and taking care of others. He loved all animals and had many beloved pets over the years.

He will be dearly missed by his mother, Judy Gray of Cadott; his son, Scott of Chetek; siblings, Bill (Sara) of Chippewa Falls, Shawn (Clint) Winger of Cadott; and Lonnie (Miranda) of Stanley; grandchildren, Parker and Destiny; good family friend and second mother, Sue Gingras of Cadott; aunt, Kathy (Tom) Austin and family of Eleva; and many nieces and nephews.

He was preceded in death by his father, Dennis; his grandparents; his son, Josh; a nephew, Jesse Amdahl; and uncle Dan Gorton.

A celebration of Rick’s life will be held at 7 p.m., Tuesday, October 15 at Pederson-Volker Funeral Chapel, Chippewa Falls.

Visitation will be held from 5 p.m. until the time of service at 7 p.m. Tuesday at the funeral chapel.

To order memorial trees or send flowers to the family in memory of Richard Gray, please visit our flower store.