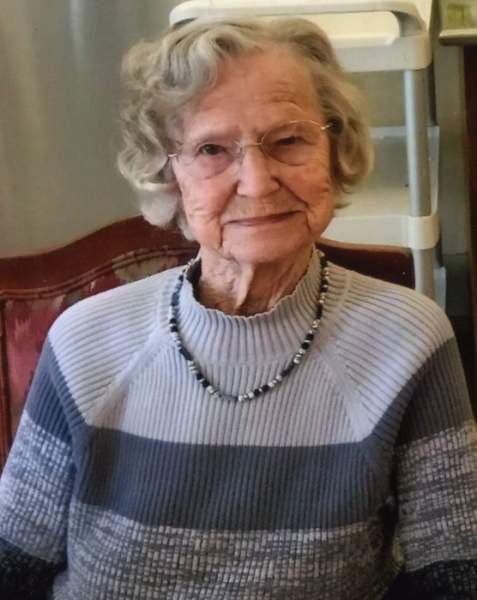 She was born December 1,1924 in Sand Creek, Wisconsin, to Alma (Gilberts) and Theodore Lofthus.  She graduated from Colfax High School in 1942.  During her senior year, she went to Washington DC and did secretarial work for the war dept. located in the Pentagon.  She returned to Chippewa Falls for graduation, then moved to Minneapolis to work at Dunwoody Institute.

While visiting home, Ruby was attending the Pines Roller Rink in Bloomer and met the love of her life, Lloyd Moats.  The two were united in marriage on November 4, 1944, in Sand Creek, Wisconsin.

They resided in Chippewa Falls in homes that Lloyd built for them, and Ruby worked as the food service director for the Chippewa Falls school district.

After their retirement, they spent the cold Wisconsin winters in Texas for 21 years. She also enjoyed quilting and made many quilts for friends and family.

Ruby was a longtime, active member of Central Lutheran Church in Chippewa Falls, and the ladies aide there.

Ruby was preceded in death by her parents; her husband, Lloyd on March 12, 2010; brothers, Omer, Mac, Clarence “Lofty”, Andy and Arnold Lofthus; and brother-in-law, Fred Dobbs.

A memorial service will be held at 11 a.m., Saturday, January 11 , at Central Lutheran Church, Chippewa Falls with the Rev. Aaron Sturgis officiating. The visitation will begin at 9:30 until the time of the service at church.  She will be laid to rest in the spring at Prairie View Cemetery, village of Lake Hallie.

In lieu of flowers, memorials are preferred to the Luther Park Ministry Center or to the Central Lutheran Church Organ Fund.

To order memorial trees or send flowers to the family in memory of Ruby Moats, please visit our flower store.