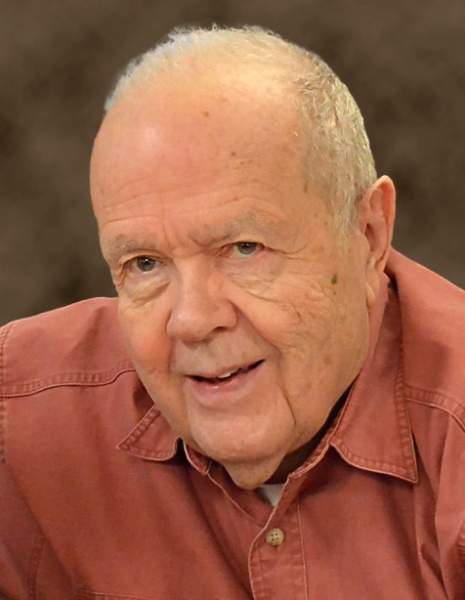 Russell Stearns Vahlbusch died on November 21, 2021, in Chippewa Falls, Wisconsin, after nearly 94 good years on this earth. Russ had real talent for friendship and organization:  he could talk with anybody, and did, and was brilliant throughout his life at keeping in touch with family, schoolmates, co-workers, neighbors, friends, and acquaintances in conversations face-to-face, on what he always called “The Bell Telephone,” through the U.S. Postal Service, and via e-mail and texts.  Even when young he loved to be “early to bed and early to rise,” and always rose before everyone else with a shockingly clear head, focused energy, and a long “to do”-list especially on Saturdays, when his young sons might be convinced to help. Russ excelled as a story teller and public speaker, and, especially later in his life, as a writer.

Russ graduated from Highland Park High School in 1945, from Highland Park Junior College in 1948, and from Michigan State College (now Michigan State University) with a B.S. in Business Administration and a minor in Insurance, in 1951. From October 1951 to September 1953 he served in the U.S. Army as a PFC and then Sergeant First Class, mostly in holding positions on the “Ice Cream Cone” and “Heartbreak Ridge” on the Main Line of Resistance in Korea. He was “on the hill” the day the armistice agreement was signed in Panmunjom, July 27, 1953.

In January, 1954, Russ married Virginia Luan Bristol of Battle Creek, Michigan, a beautiful soprano soloist and music teacher; they met while he worked bussing tables in her Alpha Gamma Delta sorority house at Michigan State College in East Lansing.  He was sure from their first meeting, but she, who still had a great boyfriend back home, was not.  And it didn’t help that early mornings were never her best time. During one of their first of many crack-of-dawn breakfast dates, Ginny laid down the law: “no talking till I’ve had my coffee!” Their love stayed vibrant and strong for 67 years.

After a short detour in insurance, Russ went to work for Michigan Bell Telephone Company in 1954 and happily stayed, as he often reminded us, “34 years, 5 months, and 24 days” in a variety of management positions, along the way earning his MBA from the University of Detroit’s “evening division” in 1958. Russ began teaching management training courses at Bell and eventually directed the company’s management training program for 8 years (his dream job) before being promoted and concluding his career as a district manager. Russ retired from Ma Bell in 1988 and was immediately hired as consultant-instructor by what was then the executive placement firm Jannotta, Bray & Associates, where he worked part-time until 1996. During his career Russ also developed and deployed his pedagogical talents by teaching the Dale Carnegie course for seven years, and business and leadership courses for Wayne State University at the General Motors Tech Center in Warren, Michigan, for three. Like many great teachers, Russ felt both himself and at home when he—in one of his favorite ways to think about teaching and presenting—“stepped in front of the group.”

Russ also used his many talents beyond home and workplace, serving as deacon, then trustee, then elder at the First Presbyterian Church, as PTA president twice, and on citizens’ committees for better schools and for downtown development, all in Royal Oak, Michigan. Russ and Ginny treasured their membership in an 8-couple Potluck group, supping and celebrating together on 10 Saturdays per year for 36 years. Russ also founded, organized, and led a glorious annual “up north” Michigan fishing trip for sons, grandsons, and friends for 51 straight years. 2015 was his last trip to “The Nook.”

Russ always wrote:  letters, poems for occasions, poignant commentaries and reminiscences. But after he retired he got serious:  he joined writers’ groups and guilds, sought feedback, and practiced. In his first big project, he researched, wrote, and published a short biography of a southeastern Michigan businessman and entrepreneur, Pat Heenan, whom he knew and admired (Don’t Give Up; Give Back, 2009). Ten years later, at 91, Russ published Working My Way Through Life, his magnum opus, an account of every job he ever had and of what, looking back with an interested and sometimes bemused eye, he learned by working there (2019, both books published by Ideas into Books: Westview).

To his sons and grandsons, Russ Vahlbusch offered love, guaranteed interest in all of our doings, and always generous advice, the latter typically delivered in any of a thousand stories from his life and work, neatly packaged with an appropriate timeless lesson. We marvel still at his unerring recall of dates and names, times and places in these stories, and at how often his guidance turned out, in retrospect, to have been prescient and sound. Dad, we will miss you and all of your stories, forever. You will always be the best father we can imagine.

Russ was preceded in death by his father (died 1986) and his mother (died 2003). He is survived by his sons and daughters-in-law, Eric and Gail (née Lyon) Vahlbusch of Green Cove Springs, Florida, and Jeff Vahlbusch and Audrey Fessler of Boone, North Carolina; and by his cherished grandsons, the children of Eric and Gail, and their wonderful spouses: Kevin Bristol Vahlbusch and Megan Bowen of Bozeman, Montana, and Andrew Eric and Allie (née Dersa) Vahlbusch of Cadillac, Michigan.

No public services will be held. The family will meet graveside in Oakview Cemetery, Royal Oak, Michigan, at a later date. Arrangements are being made by Pederson-Volker Funeral Chapel in Chippewa Falls, Wisconsin, and by Wm. Sullivan & Son Funeral Directors in Royal Oak. Condolences and memories may be sent on the Pederson-Volker website, and memorial contributions to Russ and Ginny’s beloved Chippewa Manor, 222 Chapman Road, Chippewa Falls, Wisconsin, 54729.

To order memorial trees or send flowers to the family in memory of Russell Vahlbusch, please visit our flower store.