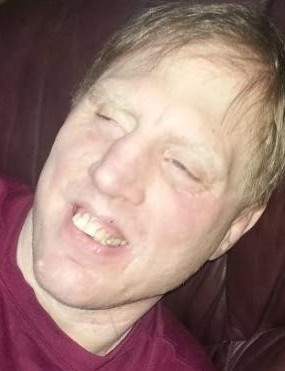 Ted (Theodore) Harrison, age 61 of Marshfield, passed away suddenly on Tuesday Jan. 19, 2021, at his home.  Ted was born in Denver, Colorado, but moved to Chippewa Falls, Wisconsin, at the age of four to Northern Wisconsin Center, where he resided for many years.

In 2007, Ted moved up to Washburn, Wisconsin, as part of the Aginzo Group, his own customized support agency. He soon became a part of his community making mail runs for the Washburn Library and delivering The Reader along the south shore of Lake Superior. He was a well-known shopper at the Washburn IGA and a part of the Messiah Tuesday Lunch Group at North Coast Coffee. His August birthday party became a neighborly event at the hands of one of his friends, Tom Cook. He spent many holidays with Tom and Deanna Yost, his housemate, Toby Yost, and their extended family.  He enjoyed his Washburn life, especially rides around town, and in fact could never get enough. Ted had a silly sense of humor and laughed and enjoyed watching The Three Stooges, and Charlie Chaplin shows.

In 2017, Ted had to leave his hometown as support shortages became a reality. In order to get the care he needed he moved to an Adult Family Home in Black River Falls, and then again in 2020 to RCI Estates in Marshfield, Wisconsin, where he spent his final year.

Ted will be missed by his friends, Michele and Keith Ochsner, Deanna, Tom and Toby Yost, and many others who knew and supported Ted throughout the journey of his life.

A Celebration of Ted’s life will be held at 1 p.m., Monday, June 7 at Pederson-Volker Funeral Chapel, Chippewa Falls WI with Deacon Dan Rider officiating. Interment will be at Forest Hill Cemetery, Chippewa Falls.

To order memorial trees or send flowers to the family in memory of Theodore Harrison, please visit our flower store.