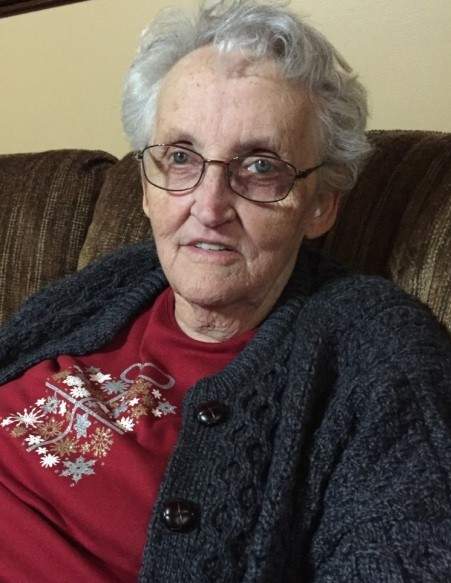 Theresa Mae Spehle, 87, lifelong resident of the town of Hallie, died Monday, September 20, at Valentines Assisted Living in Red Wing, Minnesota. Theresa had moved to Red Wing three months ago to be near her daughter.

Theresa was born on Memorial Day, May 30, 1934  to Ida (Windsor) and Alvin Sippel. She loved to tell the story that the only Memorial Day service her mother ever missed was the day she was born.

Theresa was raised on the family farm, attended Gower School, and graduated from Chippewa Falls Senior High School.  Theresa worked at the candy factory in Chippewa Falls.  Later she worked at Huntsinger Farms in Eau Claire, where she met the love of her life, John Spehle.  Theresa and John eloped to Stillwater, Minnesota, on May 17, 1957.

Theresa proudly lived in the Town of Hallie all her life.  She was a lifetime member of the Lake Hallie United Methodist church.  She enjoyed various gatherings at her church; from her faithful Sunday attendance in the same pew, to the sewing group, crafting group, ladies’ aid, serving church dinners; however she could be of service.  Theresa was an accomplished seamstress, making many dresses for her girls when they were young.  She also had a hand in making several quilts for family and friends.  Theresa loved her weekly shopping trips with her sister, Lorraine; a “good” meal out at a restaurant; fishing trips with John; and singing old hymns.  She always thoroughly enjoyed a family gathering, especially a family picnic at Irvine Park!

Theresa was preceded in death by her husband, John, in 2012. Also, her parents; and five brothers, Doug Sippel, Richard Sippel, Robert Sippel, and two in infancy.

Theresa will be greatly missed by her daughters, Cynthia Mae (Dale) Dugstad of Red Wing, Minnesota, Susan Kay (Mike) Spehle-Heiberg of Newburg, Missouri; and her one and only, proud to have her grandson, Gabriel John Dugstad of Minneapolis, Minnesota. Also she is survived by her older sister, Lorraine Gourley; and older brother, Thomas (Carol); and sister-in-law, Edith Sippel, all of Hallie. She is further survived by her sister-in-law, Marion Heintz of Eau Claire; brothers-in-law, Lamoine Spehle of Eau Claire, Chuck (Alice) Spehle of the Town of Tainter, Bill (Darlene) Spehle of Brunswick; and sister-in-law Edie (Leon) Schretenthaler of the Town of Washington. Theresa was loved by many nieces, nephews, and extended family.

A private graveside memorial service to celebrate Theresa’s life will be held at Prairie View Cemetery, where she will be laid to rest next to her beloved husband, John.

Memorials sent to the family will go toward a bench at Irvine Park. Or memorials may be directed to The Lake Hallie United Methodist Church.

You lived a very good life, Mother. Thanks for teaching us to enjoy the simple things.

To order memorial trees or send flowers to the family in memory of Theresa Spehle, please visit our flower store.