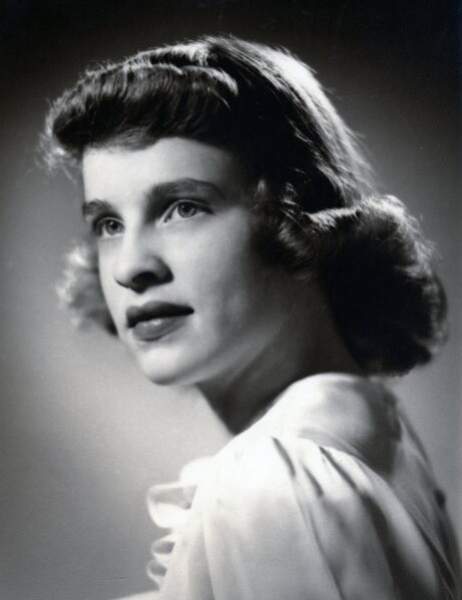 Ginny was born October 10, 1928, in Battle Creek, Michigan, as the second of three children and only daughter of Bernice J. Bristol (née Miller) and Ben L. Bristol.  While still an infant, she revealed her future musical talent by nodding her head in perfect time to music playing on the radio. At 14 Ginny began studying voice in Battle Creek with Ellen Buckley, a retired opera singer, and performed her first public solo, at the First Congregational Church of Battle Creek, that same year. Though always small in stature, Ginny developed a large lyrical soprano voice of extraordinary richness and power. Of her hundreds of solo and choral performances in churches, at civic events, and with various bands and symphonies over a 52-year singing career, we especially remember her haunting renditions of Robert MacGimsey’s “Sweet Little Jesus Boy” during years of candle-lit Christmas Eve services at the First Presbyterian Church of Royal Oak, Michigan.

Ginny graduated from Battle Creek Central High School in 1946, and from Michigan State College (now Michigan State University) in 1952, with a degree in Music Education. On January 23, 1954, she married Russell Stearns Vahlbusch, a fellow Michigan State student and a handsome, witty, self-assured busboy who worked in the formal dining room at her Alpha Gamma Delta sorority house.  Ginny happily taught second grade and music in the Fitzgerald Public School District in Warren, Michigan, until February 1955, when the school superintendent noticed her pregnancy showing.  Worried that Ginny’s pupils “might ask embarrassing questions,” he insisted that she resign. Ginny chose thereafter to live and work as a ‘stay-at-home’ spouse and mother, roles she performed with grace, wit, skill, and unconditional love. She will always be the best we can imagine.

Ginny kept and managed a beautiful house, yard, and garden, sometimes with the help of husband Russell and sons Eric (born 1955) and Jeff (born 1957). She also made the First Presbyterian Church of Royal Oak a focus of her vibrant energy, her commitment to community, and her devotion to life-long learning, especially in music, history, and art.  Ginny worked for many years as the soprano soloist and section leader in the Chancel Choir, volunteered as a deaconess, and served as chair or member of many church committees. The friends she and Russ made and nurtured from the church, especially in the legendary 16-member “Potluck” group that met over good food and wine ten Saturdays a year for nearly 36 years, are still a source of blessings and beautiful memories.

Ginny’s father-in-law, Russell Albert Vahlbusch, paid loving tribute to her often, with variations on these words:  “wherever Ginny is, she lights up the room.” Astonishingly, this stayed true even through her 30 years of living with an injured spine, near-constant major pain, and the increasingly debilitating side effects of both. Ginny’s spark glowed brightly always, and she never missed a beat.

Close family members who preceded Ginny in death include her mother, Bernice Bristol (died 1945); her father, Ben L. Bristol (died 1978); and her older brother, Robert D. Bristol (died 2014). Ginny is survived by her younger brother, Richard G. Bristol of Ft. Lauderdale, Florida; by her beloved husband of 66 years, Russell; by her sons and daughters-in-law, Eric and Gail (née Lyon) Vahlbusch, of Bay City, Michigan; and Jeff Vahlbusch and Audrey Fessler, of Boone, North Carolina; and by her beloved grandsons, the children of Eric and Gail:  Kevin Bristol Vahlbusch (Megan Bowen), of Bozeman, Montana, and Andrew Eric Vahlbusch (Allie), of Cadillac, Michigan.

To order memorial trees or send flowers to the family in memory of Virginia Vahlbusch, please visit our flower store.