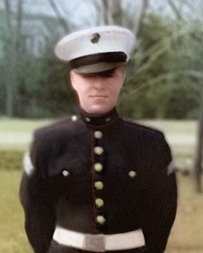 Andy served in the U.S. Marine Corps from 1947 until his honorable discharge in 1950.

In 1950, he married the love of his life, Helen Sofia Bjork in Chippewa Falls, WI. They resided in Chippewa, where he built their family home. This was where they raised their kids and Andy lived until his passing.

Andy loved being outdoors, hunting, and fishing.  He enjoyed taking care of his home, mowing the lawn, and building and fixing everything himself. Over the years, he built a cabin and a road on his land up north, which gave the whole family many years of happy memories.

For many years, Andy drove a cement mixer for American Materials, pouring concrete for roads, bridges, and many buildings.  He also drove a commercial/city bus for several years and was very proud of his safety record and all the miles he had driven

He was preceded in death by his wife, Helen in 2013; son, Jeff; sisters, Ruby Grunseth, Charlotte Nessa, Martha Belknap; and brothers, Hubert and Sanford Anderson.

Visitation will begin Wednesday at 10 a.m. at the funeral chapel.

In lieu of flowers, please make donations to the Irvine Park & Zoo in Chippewa Falls.

To order memorial trees or send flowers to the family in memory of Wilford "Andy" O. Anderson, please visit our flower store.