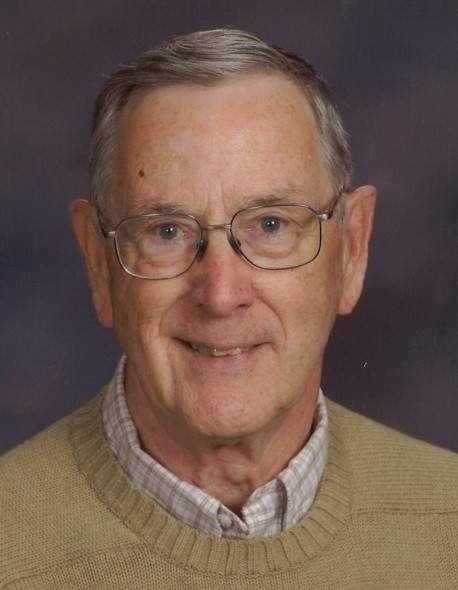 Bill lived and attended school in Chippewa Falls, graduating in 1947. He enlisted in the U.S. Navy in November of 1948. He served four years and was stationed aboard the USS Henrico APA-45, an attack transport ship involved in many operations during the Korean War.

When he returned home, he attended the vocational school in Eau Claire, earning a degree in accounting. He went to work for the A.G. Mason company for a year, and then was hired as Deputy County Clerk of Chippewa County. He later was appointed Chippewa County Auditor and continued working in that position for 32 years, retiring in 1990.

On September 17, 1955, he married Lois Kuss at Central Lutheran Church.  They enjoyed traveling and spending time with family and good friends.  They were married for 52 years when Lois passed away in 2008.

Bill was a proud scoutmaster of Troop 13 of Trinity United Methodist Church for 15 years.  He was recognized for his years of outstanding service to youth of the community through idealism and citizenship in 1975.

He joined the Over 33 Tennis League when it was formed in 1962 and played for over 40 years.  The requirements to belong to the league were that you had to be over 33 years old, have over a 33-inch waist, and be at least 33% bald.  When the league did terminate, he played tennis at the Eau Claire YMCA until he was 82. He also loved golf and enjoyed playing with Lois or his golfing buddies for many years.

He delivered Mobile Meals and was active as a Silver Sneaker at the YMCA. He joined the Senior Center in Chippewa Falls and sang with the Music Makers.

A memorial service will be held at Pederson-Volker Funeral Chapel on Thursday July 15 at 11:00 am. There will be a visitation one hour prior to the service.  Pastor Aaron Sturgis of Central Lutheran Church will be officiating.  Burial will be at Forest Hill Cemetery in Chippewa Falls after the service.

The family would like to thank the staff at Our House and St. Joseph’s Hospice for their loving care and kindness.

To order memorial trees or send flowers to the family in memory of William Gunderson, please visit our flower store.